Teenager rows 215 miles in garage for good cause 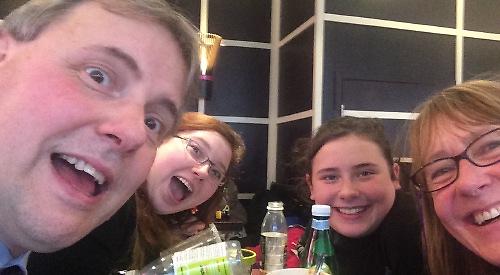 A TEENAGER rowed 215 miles (346km) — the equivalent length of the River Thames — to raise money for a cause close to her heart.

Melanie Stewart, 17, hoped to volunteer with the NHS during the early stages of the coronavirus pandemic but was told she was too young.

Instead, the Henley College student decided to undertake the challenge using a rowing machine in the garage at her family’s home in Ruscombe.

Melanie, who plans to study medicine at university, was raising money for the Royal Medical Benevolent Fund, which offers financial support and advice to healthcare professionals. So far, she has raised more than £4,000.

She began the row on May 28 and finished 78 days later having rowed for a total of 28 hours. She would vary the amount of time she spent on the ergometer and didn’t row every day during the heatwave.

Melanie posted regular updates about her progress on her online fund-raising page.

She said: “At the beginning of the pandemic they were asking for NHS volunteers on the news. I wanted to volunteer but because I’m not 18 I wasn’t allowed to. I wanted to do something to give back and my mum and I were looking at ways that I could raise money. I felt uncomfortable just asking people for money, so I came up with the idea to row.

“I chose the Thames because I’ve lived on it my whole life, I’ve rowed on it and done lots of things on the river. We used to live in London and then moved here eight years ago.”

She chose to raise money for the the Royal Medical Benevolent Fund because it was looking to support medical students.

Melanie said: “Because of the pandemic, the fifth-year students ended up being part of the NHS workforce and were dropped in at the deep end.

“I wanted to show my support for them because they weren’t getting the full teaching before they become doctors. A lot of people were struggling.

“The fund recently raised money to support medical staff that were struggling with their mental health and had post-traumatic stress disorder.

“It has also opened up a covid fund with the money that I and many others have managed to raise. They’ve funded single parents who are doctors and can’t afford day childcare or food. It is an amazing charity.” Melanie is studying biology, chemistry and maths at A-level and is considering either Dundee, Hull, Plymouth or Belfast universities to study medicine. This would be a five-year course and require a further two years as an apprentice.

She recently completed an extended project qualification, receiving an A* for her essay on whether MMR vaccinations should be mandatory in the UK.

Melanie is a keen rower and represented Sir William Borlase’s Grammar School in Marlow at the British indoor rowing championships, where she finished eighth last year.

She decided not to join the rowing squad at The Henley College because it clashed with her studies.

During her garage challenge, Melanie was supported by her father Donald, a laywer, mother Christine, a business consultant, and sister Hannah, 27, who is training to be a teacher. They were all by her side to see her complete the last leg of the journey.

Melanie said: “There were days when I felt I didn’t want to row. It was very hard and then I realised that I had to do it because I had promised to and this is what it will be like as a medical student, having to get up every day and do a full day and exhaust yourself.

“There were days when I felt so exhausted by the end of it but the moment when I finished and had my family beside me was an amazing feeling. It was definitely worth all of the turmoil.

“I went for half an hour on the last day but my parents had to invest in a fan for me. It was so hot and I needed something to regulate the heat otherwise I wouldn’t have got anywhere. They counted down the last couple of minutes, which was just amazing.

“I don’t usually like to boast about what I do and it was my family who made me realise that it was a big deal.”

After the challenge, the family bought a kitten, a black British shorthair which they have called Morpheus.

Melanie said: “The guy we got it from reduced the price by £45 and gave that money to my cause.

“There is sort of a tradition in our family with cats. When I first did the British indoor rowing championships, they said if I won my race I could get two cats.

“I did win my race and I came sixth in the country in 2016 so we got two British shorthairs, called Grace and Tilly. Since we got this cat, it has became a running joke that every time I do something cool with my rowing that we get a cat.”

To make a donation, visit bit.ly/2GvtBAr