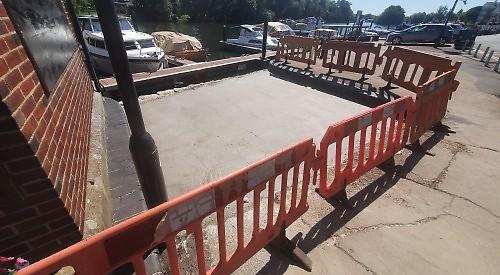 THE Environment Agency has been criticised by Henley councillors for failing to take action after a slipway was tarmacked.

Sorbon Estates removed the access to the River Thames at the bottom of Friday Street to create space for parking.

The company carried out the work without planning permission and is now being investigated by enforcement officers from South Oxfordshire District Council, the planning authority.

Sorbon also failed to obtain a flood risk activity permit and an accommodation licence from the agency, which is responsible for the river.

Town council planning officer Jodie Rhymes told a planning committee meeting that the agency had now investigated the work and assessed that the resulting flood risk was “low” and so would not be taking any action for the lack of a permit. Councillor Laurence Plant called the decision “ridiculous”, saying the company had put a few cubic tonnes of cement into a flood plain with no mitigation.

He said: “If this was a residential planning application, or even a commercial application for something like a lido, it would be near impossible and yet Sorbon has got away with just dumping concrete into a flood plain.

“They [Environment Agency] found it to be in breach and yet have decided to do nothing about it. It’s wrong.”

Cllr Plant said the agency should take enforcement action, adding: “What’s the point in having procedure if people can just breach it and get away with it?”

Councillor Stefan Gawrysiak said: “We should do the Environment Agency a favour in actually removing the concrete so that there is no flood risk from this development.

“It looks as though we have got substantial historical evidence that it’s owned by the council or not owned by anybody.

“If Sorbon have put this concrete on land they don’t own we should send in the diggers and get it out.”

Deputy Mayor David Eggleton said: “Someone has got to take action and remove it and show that people can’t just do these things even when they were told to stop.”

Mayor Ken Arlett estimated that 10 cubic metres of concrete had been “dumped” on the slipway and should be mitigated.

“I think we should go back to the Environment Agency and ask what they propose to do there,” he said.

A Sorbon spokeswoman said: “Around 2012, we received complaints regarding unsightly, unpleasant- smelling silt and debris clogging the bottom of the ramp and were notified of two health and safety issues.

She said neighbours had said this looked unsightly so it created “a more aesthetically pleasing look” with tarmac, flowers and railings.