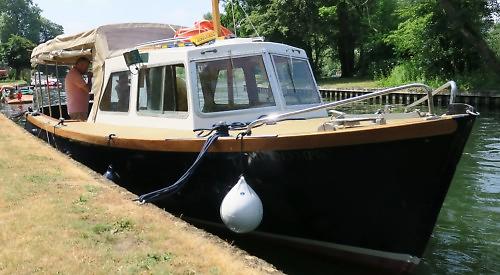 A NEW company has won the right to use Red Lion Lawn in Henley to serve refreshments and offer pleasure boat trips.

The Henley Boating Company, which is based in Wargrave, has been awarded the contract by the town council, which owns the paved riverside terrace downstream from Henley Bridge.

The previous licence holder was Sam Gill, who owned the Red Lion Hotel, which was sold last year and is now being refurbished before re-opening in the summer as the Relais Henley.

There were several bidders for the licence but councillors felt the Henley Boating Company proposal offered the most benefit to the community.

Jim Sneddon, an IT security consultant who founded the business in 2018, wants to host “pop-up” food and drink events, especially at weekends, with street food, barbecues and specialities such as sushi.

He may also hold events in aid of Riverside Counselling Service in Henley and organise river clean-ups in partnership with environmental campaigner Lynne Lambourne, from Peppard.

Mr Sneddon, 53, also hopes Red Lion Lawn will become a venue for the town’s annual Living Advent Calendar, in which community groups stage mystery performances at 24 different locations in the run-up to Christmas.

He has worked on the river at various times since his youth and currently runs his business using a 1968 Metropolitan Police launch which can seat 10 and hosts celebrations on the water.

This departs from land by the Hennerton backwater off Wargrave Road and in future will also depart from Red Lion Lawn.

Mr Sneddon said: “I’ve had my eye on Red Lion Lawn for some time as I thought it could be a real jewel in Henley’s crown and was under-used.

“If I’m honest, I was surprised to get the contract but I’m really pleased because I want to turn it into a community space again and see it used in various exciting ways while earning an income. It should be a win-win situation.”

He then put up tables and chairs for paying customers with the rest of the site being open to all.

Some residents opposed this, saying it should all be public, and at one point the town council discussed scrapping the contract.

Mr Sneddon said: “I’m very conscious of what residents think about that area and want to be sensitive to that by creating a nice space where everyone can be happy.

“It looks a bit sad at the moment as there’s nothing there but I’m looking forward to cleaning it and breathing a bit of life back into it.

“A lot of people can benefit and it will be as inclusive as possible.”

He said he had spoken to lesiure operator Hobbs of Henley and Grace Leo, the new co-owner of the Red Lion, and wanted to work with them to service his events. Mr Sneddon, who lives with his wife Christie and their two dogs, started his company to cover the cost of his boating hobby but decided to take it more seriously after losing several data protection contracts with clients who took services in-house after Brexit.

He says there will be more demand for leisure use on the River Thames after the coronavirus lockdown ends because overseas travel may not be possible for some time.

Mr Sneddon said: “I was thinking of expanding last summer but the lockdown delayed that and there were difficulties importing the boats from Europe.

“However, as people take to the river again, I think this will be greatly appreciated.”

He recently bought a six-seater launch and three smaller vessels with outboard motors which will be available for self-drive hire from a site on the Culden Faw estate off Marlow Road, near Temple Island. These won’t launch from Red Lion Lawn.

Mr Sneddon is also in talks with Hobbs about use of the lawn’s moorings, which the company used to have the exclusive right to.