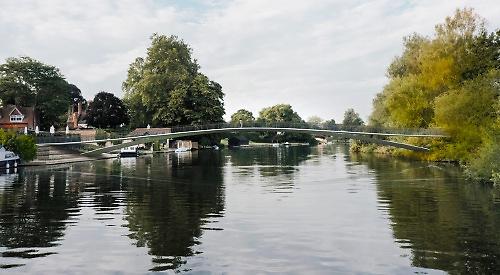 PLANS to introduce a river crossing between Wargrave and Shiplake are gathering pace.

The committee of the Wargrave and Shiplake Bridge Campaign have had “very encouraging” talks with Mitchells & Butlers, which owns the St George & Dragon on High Street, where one end of the footbridge might be.

Various other potential sites, which have not been named, have also been considered but the pub land is considered to be the most suitable.

A feasibility study found that every single crossing point would either start or finish, or both, on private land, either residential, farming or commercial.

The pub site is favoured by Knight Architects, of High Wycombe, which  is offering free advice in the early stages of the campaign. The company designed Taplow Bridge.

Anne Malone, a member of the committee, said: “We have had very encouraging engagement from the St George & Dragon and their operating company about the feasibility of a bridge from that location.  Discussions have been hampered by covid as various key staff are on furlough but they have expressed keen interest in the overall project.

“We have also been given extremely helpful support from Knight Architects regarding site feasibility and their view is that the St George & Dragon is the most suitable location if consent can be obtained.”

The committee was formed last summer in a bid to resurrect old plans that never came to fruition.

In 1997 Wokingham Borough Council approved an application by South Oxfordshire District Council for a foot and cycle bridge across the River Thames.

The suggested site at the time was the railway bridge, which originally had two tracks.

The Henley branch line from Twyford is now single-track but the cylinders that supported it are still standing. The idea was to seek funding from the Millennium Commission for a tourist attraction but the bridge was stongly opposed by residents of Shiplake.

Last year, a survey was carried out to gauge local opinion now. A total of 948 people responded and 95 per cent of them were in favour of a bridge.

Mrs Malone said: “While feedback to date shows that this is an extremely popular project, especially among Wargrave residents, problems arise when the bridge has to start from,  or finish at, private land.

“We have contacted many of the relevant landowners and their most consistent objection is the fear of an increase in criminal and antisocial behaviour on or near their land.

“Some landowners commented that antisocial behaviour along the riverbank was particularly bad last summer with large groups of teenagers and young adults congregating on the Shiplake bank, jumping from bridges, trespassing on private land and leaving litter.

“These issues were no doubt made worse by the covid restrictions with young people having nowhere else to go but nevertheless this would need to be resolved on an ongoing basis if the bridge project is to gain any traction with affected landowners.

“Without key landowners’ consent there is little chance a project like this could succeed.”

Mrs Malone said she wanted build a good relationhip with Shiplake Parish Council, which initially said it would keeping an open mind about the project but then said it would not back a bridge due to concerns about overcrowding on Shiplake Meadows, people jumping off it and vandalism.

The campaign group, which is predominantly comprised of people from Wargrave, hopes to persaude opponents that these issues can be overcome.

Wargrave Parish Council has already awarded a £500 grant towards the feasibility study and establishing land ownership.

Councillor Michael Etwell, who sits on the campaign group, told the parish council at a meeting on Monday that there was a “lack of engagement” from Shiplake and they hoped to work on that this year.