Slipway to be restored after row 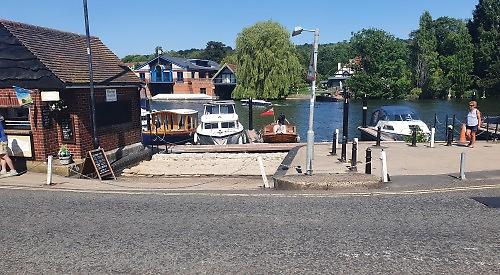 A SLIPWAY in Henley that was filled in with concrete is to be reinstated.

Sorbon Estates has agreed to carry out the work after levelling off the access to the river in Thames Side at the bottom of Friday Street without permission last summer.

The company said the slipway had posed a risk to pedestrians but in effect created more parking spaces.

The move was criticised by residents, town councillors and river users.

Now Sorbon Estates has agreed to dig out the concrete following talks with the council. New railings will be also installed along the public footpath.

The ownership of the land is unclear but Sorbon Estates owns several moorings next to it. The development company is part of the Shanly Group.

Town clerk Sheridan Jacklin-Edward said: “We would like to recognise Sorbon Estates for resolving this situation and ensuring that this important riverside amenity is restored. In particular, we’d like to thank Michael Shanly for addressing our concerns and for his personal guarantees to instruct the necessary work.

“The river is a significant part of Henley’s identity and history. Protecting access to it is all-important.”

In July last year, councillors spoke of their “dismay” at the slipway vanishing.

Councillor Stefan Gawrysiak said: “We should be moving in immediately with the pneumatic drills to get it back to its status quo.

“I would appeal to Sorbon Estates to do the right thing and for them to actually move in, at their own expense and with their own diggers, and just return it to what it was.”

Sorbon Estates said it carried out the work in response to complaints going back as far as 2012 that the area looked “unsightly”.

Neighbours suggested that concrete, along with flower tubs and railings, would be more attractive.

An investigation was carried out by South Oxfordshire District Council, the planning authority, which found the company had acted without permission.

Sorbon Estates also failed to obtain a flood risk activity permit and an accommodation licence from the Environment Agency, which is responsible for the river.

The agency decided to take no action against the company, which led to more criticism by councillors.

Councillor Kellie Hinton, who chairs the town council’s recreation and amenities committee, welcomed the proposed re-instatement of the slipway.

She said: “I think everyone in the town was shocked when this concrete suddenly appeared. People will be pleased to see the historical look of the slipway restored.”

Councillor Ian Reissman said: “We have been talking to Sorbon Estates for a while and we finally managed to come to this resolution.

“This is the first step in making sure that the public amenity is restored. Everyone was in favour of having it restored — the mood of the town was very clear.”

John Skuse, Middle Thames chairman of the River Thames Society, said: “I will believe it when I see it, but I am delighted.

“I would like to think our society has made a contribution to this outcome.

“We have been writing letters to the Henley Standard and one of our members wrote directly to the Mayor.”

n a statement, Sorbon Estates said: “We are pleased to be working with Henley Town Council to find a satisfactory resolution to this issue, culminating in the concrete’s removal.”