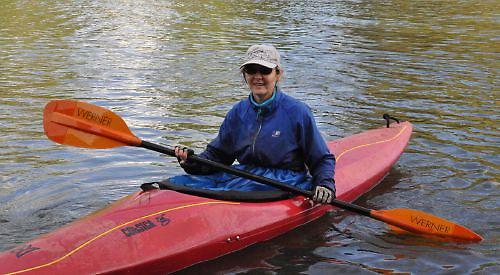 A WOMAN has spoken of her shock after finding four drowned sheep while kayaking near Charvil.

She believes they died by accident but the owner thinks they were spooked by a dog in their field and ran into the water.

Just minutes after finding the dead animals, Mrs Offley discovered a live sheep further along the stretch and jumped into the water to rescue it and take it back to the bank, injuring her back in the process.

She was on the water with her husband Nigel when she came across the sheep in the stream, which flows between the River Thames and the River Loddon.

Mrs Offley, a cognitive hypnotherapist, said: “We turned into the stream at Charvil and it was a few hundred yards along there.

“I was dismayed. Presumably, they had somehow got out of their field and fallen into the water, or maybe stepped out on to the lush river vegetation for a snack, not bright enough to realise that it was in the river itself. It was a bit of a sorry sight.” The couple continued their journey until further downstream Mrs Offley spotted the head of the live sheep near the bank.

She decided to try to save the animal so she climbed on to the bank and, with her husband’s help, managed to haul it out of the water.

Mrs Offley said: “I thought, ‘something has to be done, we can’t just leave her’. We had to try to help.

“We decided that since it was so difficult to get out of the kayaks at this point in the stream I would be the one to clamber on to the bank and Nigel would be able to help me from his boat.”

Despite hearing “something go click” in her back, Mrs Offley said her main concern was getting the sheep to safety and informing the authorities. She said: “I rang 101 and said two things — the Environment Agency needed to remove the dead sheep and, more urgently, they needed to track down the farmer and let him know the sheep were getting out of their field.

“I wasn’t going to rest until I had done everything I could to stop any more sheep escaping from their field and perishing in the water.”

The land is part of Newlands Farm in Loddon Drive and is owned by Belcher Farms, run by John Belcher.

Mr Belcher said: “A dog has got into the field and spooked the sheep and they’ve gone into the river.

“I found out when the police called me so I went down and got them out and then sent them away.

“I am angry. I also lost 37 ewes last winter which were killed and there was nothing I could do about it.”

A spokeswoman for the Environment Agency said it wasn’t aware of the incident.

l Firefighters freed a deer which got stuck in a bush near Crazies Hill. A crew was called to Hatch Gate Lane on Tuesday last week after reports that the animal was trapped. They cut away some of the branches to free the deer, which was unhurt.