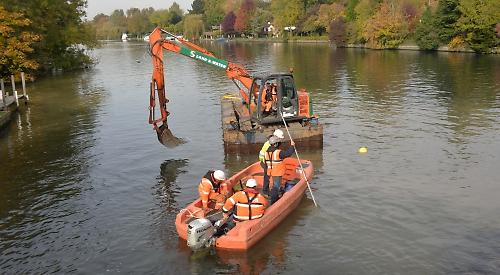 A SHOAL in the River Thames near Marsh Lock in Henley has been removed.

Staff from the Environment Agency removed the silt and gravel that had built up over time and was not dispersing naturally.

The work took place on Thursday last week and was part of a planned maintenance programme.

The workmen used a floating digger to dislodge the gravel and then measured the depth of the water.

They were working near the wooden footbridge where the water runs off from the weir.

An agency spokeswoman said: “Shoal removal is an important part of our maintenance programme to improve the ability of the River Thames to carry increased flows and ensure users can navigate effectively.

“We have been monitoring the levels of silt in the Thames for many years and have used this data in planning this project.

“Impact on the environment has been greatly reduced by timing the works to avoid sensitive times for wildlife, particularly the fish spawning seasons and bird nesting season.”

The silt and gravel are classed as non-hazardous and will be used to “reprofile” other areas of the river.

Sally Rankin, of the Henley Wildlife Group, said: “I hope whatever they were doing was done with wildlife in mind but the Environment Agency is pretty good.”

In 2014 town councillors rejected a proposal to set aside up to £15,000 to dredge the river at the lock off Mill Lane.

It came after building work at the nearby weir caused an island to form from sediment in a section of the river.

Property developer Alan Pontin and radio presenter Mike Read, who live in Mill Lane, waded out on to the island to “claim” it using a British naval ensign and flag of St George.