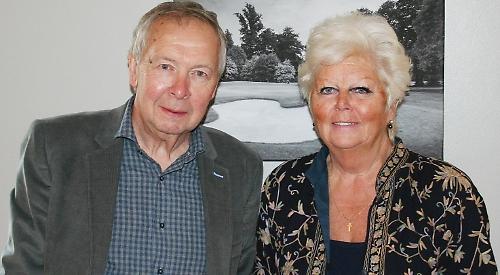 LAST year’s mayor of Henley, Julian Brookes, spoke to Rotarians about his early life as a naval officer and electrical engineer serving in submarines.

The occasion was the club’s weekly Wednesday evening meeting last week at Badgemore Park Golf Club, which involved members and their guests.

Mr Brookes covered some history of submarines and went on to outline the complex and rigorous training endured by submariners, including the “Perishers” in which everything that could possibly happen is thrown at trainee captains to try to break them.

Like airline pilots, submarine captains are re-examined every six months.

Audience members were treated to photographs of submarines from the Oberon, Resolution and Trafalgar classes, several of which Mr Brookes had served on during his naval years in the Seventies.

There was a real impression given of the intensity of the work that could involve eight-week patrols with everyone working noiselessly from 6am to 6pm, followed by dinner and a movie, all conducted in a dark and gloomy atmosphere. Geoff Thomas gave the vote of thanks, commenting that many people join the navy to see the sea but this doesn’t apply to submariners, of course.

At the club’s breakfast meeting at the golf club the following day, local man Jon Ryan (husband of Henley Literary Festival founder Sue Ryan) spoke about his life as a journalist in Fleet Street.

Mr Ryan told of leaving college with the dream of becoming a traditional newspaper reporter asking questions and then seeing his words in print. The reality was several years as a trainee, attending hours of council meetings and the like to learn his trade.

In time he made the grade and worked for many years at the Daily Mail, where he turned up every day with a suit and a passport just in case he needed to attend a corporate event or take a plane to cover an overseas story. He recalled Lord Northcliffe’s diktat that news is what somebody somewhere does not want you to print.

Mr Ryan went on to work for the Mail on Sunday and for many years he was the sports editor of the Sunday Telegraph.

In the latter role he worked with such luminaries as John McEnroe, Mike Atherton, John Motson, Paul Ackford and others.

He related some amusing anecdotes about his time on these prestigious national newspapers during their heyday when circulations ran into the millions.

He also touched on the change that has occurred in recent decades with people increasingly consuming news on digital devices.

Finally, he emphasised, by waving them at the audience, the fact that he still purchases paper versions of his favourite newspapers, including the Henley Standard.