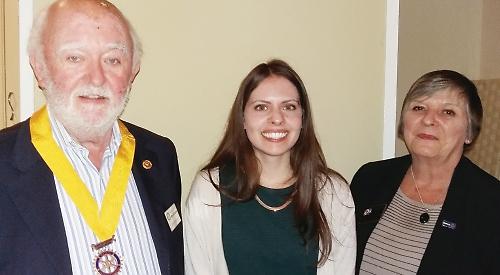 FOR many years students from all over the world have been welcomed into the local Rotary district, District 1090. Known in parlance as ambassadorial scholars, there were 17 this year and one of them, Ginger Cline, sponsored by Rotary clubs in Connecticut, spoke at a meeting of the Rotary Club of Henley Bridge about the refugee situation between Cuba and America.

She is currently studying for a masters’ degree in refugee and forced migration studies at Oxford.

Helped by pictures and slides, Ms Cline gave Rotarians and guests some background to US/Cuba relations, starting in the Fifties when Cubans were viewed as political refugees fleeing from communism and were therefore given special status.

This enabled them to settle quickly in the US with substantial financial help from the Government. Later on the Wet Foot, Dry Foot policy expedited resident status for those who managed to land on US shores. It is said that this open door policy drained Cuba of its elite.

Ms Cline also touched on the 2014 deal made between Raul Castro and President Obama to normalise relations between the two countries and the fact that President Trump is likely to revoke that agreement.

Rotary’s scholars are enabled to study in countries other than their own and in return are expected to attend Rotary clubs in the host country to speak about their study subjects and their lives.

This club sponsored a Henley student to study in the US about nine years ago.

Joy Arnott, president of District 1090 and member of this club, reminded members that Rotary clubs always welcome applications from graduates to apply for such scholarships.