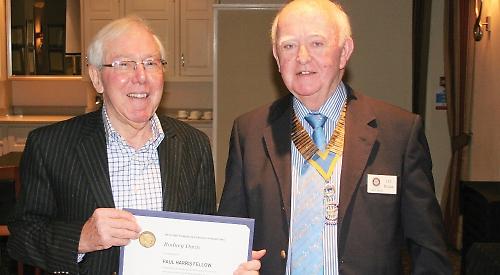 A MEMBER of the club has received an award for outstanding service to Rotary and the community over a period of more than 10 years.

Rodney Davis, who has held several senior roles in the club and also organises social events for members, was presented with the Paul Harris Fellowship award by club president Ian McGaw.

Mr Davis lives in Benson, where he is a churchwarden and judge of local horticultural shows.

He has also been secretary of the Henley Business Partnership and his local River Thames users group. For the Rotary Yachting Fellowship, he has been secretary and Commodore for Great Britain and Ireland.

The Paul Harris Fellowship award is named after the founder of Rotary and is the most prestigious honour that can be bestowed on a Rotarian in recognition of exceptional service.

Every Paul Harris Fellow receives a pin, medallion and certificate.