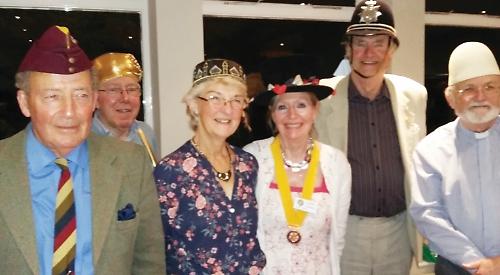 WHAT men’s hats say about their wearers became obvious when more than 50 hats of all descriptions from around the world were shown to members and guests at last week’s meeting.

In a humorous talk, Rev Dr Anthony Peabody and Major John Steeds explained how a man’s hat can signify his job or religion and the type of person he is.

The men are friends who for many years have together collected an assortment of headgear, some of it amusing, some strange and some museum pieces.

Rotarians were shown boaters and rowing caps, tin police helmets and a magnificent, red-plumed Italian police hat. Then came hats worn by a yeoman warder, a governor general of the West Indies, a Tsarist soldier, a Russian tank driver and a Romanian goat herd. There was an opera hat, a soldier’s busby, a Canterbury hat as worn by Thomas Cranmer, a biretta for a Roman Catholic monsignor, a golden wedding hat from India and an East German border guard’s cap.

There was a large number of kufis, or topis, the prayer caps worn by Muslim men in South Asia and countries on the Silk Route — these were exquisitely beaded, embroidered or crocheted.

A Georgian white hat signifying that the wearer is an eligible young bachelor caused some amusement when Dr Peabody bought it and then wore it on holiday not knowing its import.

At the end of the talk Rotarians were invited to examine the hats and even to try them on.

The meeting was held at Badgemore Park Golf Club where the club gathers every Wednesday at 7.30pm for fun, fellowship and friendship. New members are always welcome. For more information, please call 07769 687326 for information.

• Major John Steeds, Lancashire Fusiliers, real tennis player, cricketer, purveyor of fine Victorian Art and a good man to have in a crisis. Rev Dr Anthony Peabody, forensic scientist, banjo player and rower. If you are with him in a crisis, it’s probably too late!