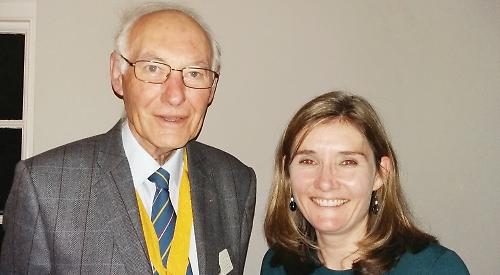 SUZIE PUGH, curator of the Royal Institute of British Architects’ archive, gave a talk to members at their evening meeting at Badgemore Park Golf Club on Wednesday last week.

Her talk was amply illustrated by slides showing some of the drawings and watercolours of renowned European architects from past to present.

The RIBA archive, which has been housed at the Victoria and Albert Museum since 2004, consists of four million items managed by seven curators.

Spanning hundreds of years of the built heritage, it includes some of our most iconic buildings, civic architecture, stately homes and social housing projects.

Ms Pugh treated the audience to an array of the treasures held by the RIBA since its foundation in 1834.

RIBA holds the drawings of Andreo Palladio, Inigo Jones and his pupil John Webb, of Talman, the architect of Chatsworth House, a few items relating to Sir Christopher Wren, and those of Hawksmoor, Waterhouse and his son and grandson, all three of whom were presidents of the institute.

Gilbert Scott, of St Pancras fame, and his son Giles Gilbert Scott, designer of Battersea power station and the red telephone boxes, came next, followed by drawings by Edwin Lutyens for the Viceroy’s House in Delhi and Munstead Wood House.

A novelty item was the Archi Tetes series of cartoons featuring Prince Charles, Charles Rennie Mackintosh and others which morph into buildings when seen from above.

Finally, Ms Pugh outlined the availability of thousands of digital images available online either for illustrating a project or for non-commercial private study at www.architecture.com/
images.