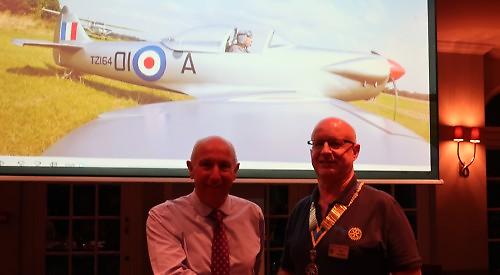 READING man Alan James, who built a Spitfire in his garden shed and now flies it over Oxfordshire, told Rotarians how he went about this amazing project, which won him praise in national newspapers and on TV.

Mr James told members how he had always wanted to fly a Spitfire.

When in 2012 he realised a flight would cost him about £6,000, he thought perhaps he could spend that on building his own plane.

He had heard about John Isaacs’s drawings for a DIY kit published in the Seventies. These were based on a 60 per cent scale model of the original Spitfire.

By asking around, he discovered that many people had tried but no one had ever completed the build.

Mr James had been an aeroplane enthusiast from boyhood.

Not only that, he had a pilot’s licence, was a member of the Light Aircraft Association and an enthusiastic woodworker. His large home workshop was equipped with lathes, saws, drills and workstations.

On the wall were pictures of aeroplane propellers he had lovingly constructed, planed and varnished over the years. He had also built a replica of a 1929 Pietenpol Air Camper and flown it about 30 years ago.

Mr James decided to go ahead and build the Isaacs Spitfire.

Aviation quality Sitka spruce was sourced from Vancouver, then cut, shaped and assembled by Mr James.

The skin was made of plywood, which was cut and shaped by Mr James, covered with sailcloth then treated with aviation varnish known as dope.

The propeller was carved from five layers of laminated beech.

An old 100 HP Rolls Royce engine made for a Piper Cub was located in Holland and re-assembled by Mr James with some spare parts bought from America.

The metal control column, fibreglass cowling and steel brackets and joints were all made by Mr James.

An aluminium fuel tank was made by a Ministry of Defence welder in Tilehurst.

Every stage of construction was tested by an LAA inspector.

It was finally checked by different inspectors to obtain Civil Aviation Authority certification.

After many hours and about £18,000 later, Mr James fulfilled his dream.

Now he takes to the skies most weekends from an airfield west of Pangbourne.

The plane reaches 160mph and as it has been approved for aerobatics, Mr James likes to practise some of the daring manoeuvres seen in Second World War fighter pilot movies.

The Rotary Club of Henley Bridge holds meetings on Wednesday evenings and early on Thursday mornings at Badgemore Park.