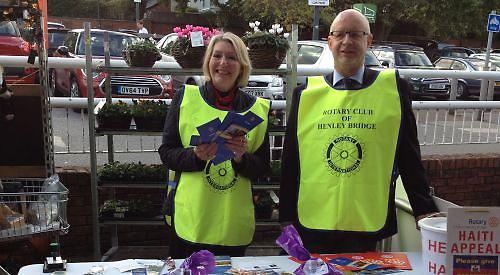 THE club has held a series of fund-raising events to provide Shelter Boxes for the people of Haiti following Hurricane Matthew.

This included a collection held in the car park at the Henley half marathon on October 9, which raised £290.

In total, we have raised £514 for the Haiti appeal.

The Shelter Boxes include a tent which houses 10 people, basic cooking equipment, including pots and pans, equipment which allows for cultivation, including shovels and spades, and water treatment equipment which gives clean water, a major priority when disaster strikes.

On October 12, Derek Dudley, the residence and segregation manager at Huntercombe Prison, gave a talk about the work of the prison and spoke about life for those who serve their sentences there.

Derek spoke at length about the training and education programmes which HMP Huntercombe undertakes to ensure that, when released, prisoners are able to find employment.

Many of the skills obtained help reduce the cost of running the prison because of the varied range of occupational courses available to prisoners.

For example, the British Institute of Cleaning Science provides a recognised qualification and those that pass the course help keep the prison clean.

Prisoners can also learn a variety of building skills, including bricklaying, plastering and tiling, which after two years leads to recognised qualifications.

On Saturday, October 17, members of the club held an information day outside Waitrose in Henley.

The weather started off rather damp and dull but improved throughout the day and the Rotarians were able to engage with many people, talking about the work of the club and the movement.

The key features of Rotary are fun, fellowship and fund-raising.

Members talked about the fun and fellowship Rotarians engage in, such as Pooh sticks championships, Santa fun runs and organising the Henley half marathon and Henley Standard 10km races which take place each October.

The club raises money for many local charities including Camp Mohawk, the Chiltern Centre and the Volunteer Drivers.