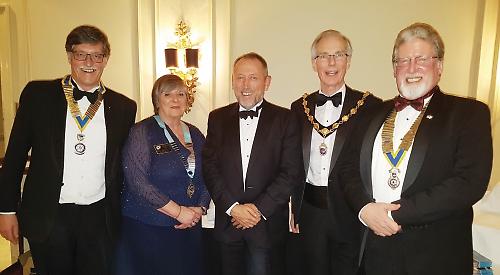 ON Tuesday last week, the Rotary clubs of Henley and Henley Bridge met together at the Red Lion Hotel to celebrate the foundation of the organisation which became Rotary International.

On February 23, 1905, Paul Harris, a Chicago lawyer, invited three of his business friends to meet together in one of their offices to enjoy fellowship through business.

They met weekly after that, rotating the venues round their respective offices, which was how the name “Rotary” was coined.

They enlarged their circle of members so much that they ceased rotating and shifted their meetings to hotels or restaurants.

By 1907, the club members started carrying out community service work, one of their first projects being to construct Chicago’s first public lavatory.

Thus began the worldwide movement which today has 1.2 million members in 35,000 clubs in 120 countries.

The international organisation’s main charity, the Rotary Foundation, was formed a few years later and is this year celebrating its centenary.

In recent years, the two Henley clubs have held a joint meeting on or around February 23 to celebrate and remember Paul Harris, taking turns in hosting.

This year it was the Henley club’s turn to convene the event and club president Lionel Scott welcomed members of both clubs. The Henley Bridge club was led by its president Stefan Gawrysiak. Mr Scott also welcomed the Mayor of Henley Julian Brookes, the Rotary 1090 district governor Joy Arnott and the guest speaker, Captain Adrian McCourt, one of the ambassadors from Trinity House.

Capt McCourt, who served as a Merchant Navy captain, joined the Trinity House Younger Brethren Ambassadors Group in 2013, a year before the 500th anniversary of the organisation, which was founded by royal charter during the reign of Henley VIII to regulate and improve the state of shipping and the well-being of seafarers.

He showed a video about its work as the General Lighthouse Authority for England, Wales, the Channel Islands and Gibraltar.

It is also a charity dedicated to the safety, welfare and training of mariners.

In addition it is a deep sea pilotage authority, providing expert navigators for ships trading in northern European waters.

The Corporation of Trinity House has now opened the doors of many of its lighthouses for public view, offers voyages on its flagship THV Patricia and has converted a number of the lighthouse keepers’ cottages into holiday accommodation.

Joy Arnott proposed the vote of thanks.

Earlier in the evening, Mr Gawrysiak gave grace after the candle of friendship was lit by his club’s president-elect, Ian McGaw.

The objects of Rotary were recited by the Henley club’s president-elect Maria Bunina and, in accordance with tradition, secretary Philip Fletcher, gave the “Last accolades”, a passage of words originally spoken by a friend about Paul Harris when he died in 1947.