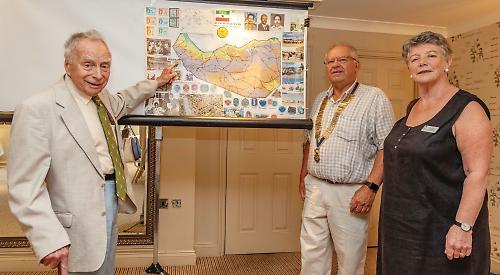 THE club’s twilight meeting on Tuesday last week at the Red Lion Hotel had a dual purpose.

Firstly, there was the presentation of a cheque for £450, which the club had augmented as a result of members’ assistance in the collection for the residents of Borama in Somaliland.

The town, with which Henley has a friendship link, was hit by a tropical cyclone in May which killed 60 people and much livestock and destroyed homes.

Brig Page gave a potted history of Somalia and Somaliland, where he served with the Somaliland Scouts, a battalion of the British army, from 1947 to 1951.

He and Councillor Smewing thanked the club for adding to the collection and club president Peter Thomson acknowledged.

The advertised talk for the evening was from one of the club’s newer members, Elsie Frost (née Fletcher but no relation to club secretary Philip Fletcher).

Elsie was born in Yorkshire. Her mother came from a farming family and her father was employed by the Civil Service, which involved the family moving about.

He was posted to Northern Ireland during the period of unrest and later worked at RAF Northolt in West London.

Elsie turned down the chance to read sociology at Nottingham University because the admissions tutor considered it was “a waste of time educating women”!

She left the family home when her father was posted to Aden and got a job with Middlesex County Council, which was later subsumed into the Greater London Council.

She met her husband James, who was training to be an accountant, and they obtained one of the last mortgages offered by the old London County Council on a small detached house in Seer Green, Buckinghamshire.

Later the couple moved to Wendover where both their daughters were born at the RAF Halton hospital.

Elsie then undertook a two-year teacher training course with Milton Keynes College and taught at a school in Aylesbury but, having qualified as a mature student, she was appalled by the drop in standards of education.

Having moved several more times in Buckinghamshire, she and James both retired and learnt to fly, firstly in light aircraft and later in helicopters.

James was already a Rotarian when Elsie joined the Soroptimists, a women’s service organisation, which did good work in supporting the local women’s refuge by running karaoke nights.

She was president in 1999-2000 and, among her achievements, she persuaded Sophie, Countess of Wessex, to preside over International Women’s Day in Aylesbury.

The club was also host to the BBC’s Gardeners’ World on one occasion.

Elsie left the Soroptimists in 2003 and she and James devoted themselves to the National Gardens Scheme and she became chairman of Cuddington Gardening Club.

She joined Aylesbury Rotary Club, where James was already a member, in 2015. The couple moved to Henley in 2017 to be nearer their daughters.

The president thanked Elsie for a fascinating presentation.