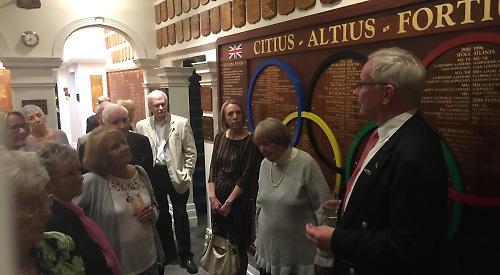 IN August 2009, Leander Club’s press and publicity officer Robert Treharne Jones spoke to a lunch meeting of our club, when he described his careers in both medicine and rowing commentating.

On Tuesday evening last week, Henley Rotarians invited their partners to a clubhouse supper tour of Leander Club at which the guide was none other than Dr Treharne Jones.

He conducted the
21 visitors on a fascinating 90-minute tour of this famous club, which has been celebrating its 200th anniversary this year.

This took in the honours boards, the members’ private drawing room and the main dining room where the legendary Cork Cups are displayed.

On the second floor, the visitors saw the impressive library, the conference room often used for corporate seminars and one of the 11 bedrooms sponsored by different universities, colleges and schools from home and abroad.

Among the many fascinating artefacts were medals awarded to two members of the Leander eight that won the Grand Challenge Cup at the second Henley Regatta in 1840 (the club didn’t compete in the first one) and a picture of a third crew member.

Proceeding to the “working” end of the building, the visitors passed the crew dormitories and the dining room where they were fascinated by notices showing how many calories the athletes are expected to consume every day.

They descended into one of the bays of the boathouse and had a quick look at the gymnasium in which there were banks of rowing machines, normally frantically and noisily being used, but quiet at that time of the day.

The visitors then sat down to a two-course supper in one of the club’s private rooms, where Dr Treharne Jones continued to regale his audience with interesting information.

He answered a plethora of questions about the club, its personalities and its athletes as well as passing round a copy of the club’s history, published this year.

President Peter Thomson, who is a member of the Phyllis Court Rowing Club (the only rowing club actually in Henley, he pointed out!), thanked Dr Treharne Jones for giving Rotarians and their guests such an enjoyable and informative evening.

The club’s Christmas bingo event will take place at Henley town hall on Friday, November 16 with “eyes down” at 7pm. There will be super prizes as usual and it’s a great night out.

The club acknowledges the generosity of the town council for free use of the hall.