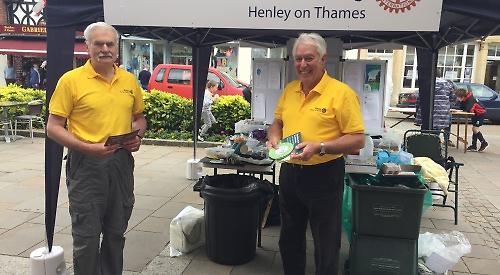 VISITORS to Henley market place on Saturdays may find themselves being approached by Rotarians asking them if they know what they can put in their “green” recycling bins.

Many of them admit to being confused about what they can and can’t recycle and are grateful for additional advice being provided by Henley Rotary Club.

Under the catchy banner of “Rotary talks rubbish”, members set up a display in the centre of town giving examples of items of household waste that can be recycled.

They explained the difference between materials that can go in the green bin and those that are not recyclable at the moment.

For residents of South Oxfordshire, they provided a helpful guide showing which bin to use and what to do with bulkier waste items.

Explaining how this came about, club secretary Phil Fletcher said: “Last year, we organised an outing to the Viridor energy recovery facility at Ardley, near Bicester.

“There we learned that the waste collected in black bins is incinerated and generates enough electricity to power the equivalent of 60,000 homes.

“We realised that most people don’t know this and assume the rubbish goes into landfill, so we decided to explain this as part of our service to the community.”

In preparation for this activity, the club invited the recycling officer from South Oxfordshire District Council to speak at one of its meetings.

She explained that the council recycles 63 per cent of household waste and is third best among English local authorities.

As well as diverting 95 per cent of the “black bin” waste from landfill to incineration, it also uses the food waste to create methane and generate electricity for 4,500 homes.

She was able to answer detailed questions from Rotarians which helped them to prepare to meet the public and also introduced them to Binzone, a smartphone app that explains what to recycle.

But explaining recycling to people passing by in Falaise Square is not straightforward.

Every local authority has a different recycling system, so we had to be careful to give out correct information.

The first thing we did was ask members of the public whether they were “locals” or not.

If they were from South Oxfordshire, we could continue with the explanation, otherwise we stopped talking “rubbish” but were still able to explain what we were doing.

Many people were interested to see this as an example of a Rotary community service and we were able to welcome visitors to Henley from all over the world.

The club is planning one more session on June 29 and plans to hold a few more in the autumn, once the summer tourist season is over.