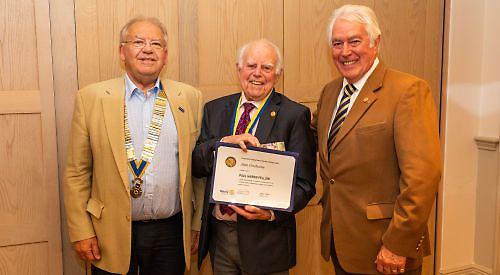 THE club held its president’s night at the Great House in Sonning on Friday.

It was an informal gathering, with official guests Paul Harrison, president of the Rotary Club of Henley Bridge, and Malcolm Leonard, its president-elect.

There was a surprise presentation of a Paul Harris Fellowhsip made to a special guest, Alan Grahame, the well-known vibraphone player from Sonning Common, who is in his nineties.

Club secretary Phil Fletcher gave the speech as follows: “On behalf of all the members of the Rotary Club of Henley, we thank and pay tribute to a special person tonight.

“During a long and illustrious career as a professional musician, our principal guest played for some of the top international stars. In fact, they used to request that Alan Grahame was part of the band whenever they toured over here. Howard Keel, Shirley Bassey and Tony Bennett to name some of the biggest.

“Alan also played with Duke Ellington — in the world of jazz, none bigger.

“We know Alan for his work with the bands appearing at our annual jazz concerts. In some cases if he wasn’t playing he was coaching the bands to improve their professionalism.

“I have known Alan for getting on for 40 years as our daughters were very good friends in their teenage years. I remember early in my Rotary career I needed to raise some funds and asked Alan if he could get a band together.

“Without hesitation, Alan brought part of his Berkshire Big Band and played in a tent on the lawn of the Red Lion in Peppard. Similarly, Alan has helped numerous local good causes and for many years he played at the Binfield Heath flower festival with the Berkshire Big Band.

“Ken Fitt tells me that when he was head at Chiltern Edge School, he only had to ask for help and Alan was on hand with a band at a function.

“Alan voluntarily coached, mentored and encouraged numerous young musicians. He was a peripatetic music teacher at St Edward’s School. It is this work that has the most benefit for the community.

“Alan Grahame, we salute you and present you with the highest honour a Rotary club can bestow on a member or friend of Rotary, the Paul Harris fellowship.”

Club president Peter Thomson thanked everyone for coming and thanked his fellow Rotarians for their suppport during his year in office.

• The Paul Harris Fellowship is named after the Rotary movement’s founder and awarded in recognition of exceptional service to the community, over and above a conscientious Rotarian’s normal contribution.