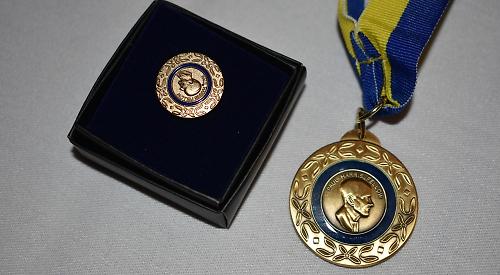 A MAN from Remenham Hill has received the highest honour bestowed by the Rotary Foundation.

Patrick “Paddy” Nicoll, 53, became a Paul Harris Fellow as he was presented with a certificate, medal and badge at a special ceremony at the the Red Lion Hotel in Henley attended by about 20 people.

The fellowship acknowledges individuals who contribute, or who have contributions made in their name, of more than $1,000 to the foundation.

Mr Nicoll has served as a trustee for the River & Rowing Museum, the Henley Festival and the Henley Show.

The presentation was made by Barry Prior, president of Henley Rotary Club.

Mr Nicoll, a former soldier who lives with his wife Annabel, said: “I’m incredibly honoured. More importantly, it’s a nice moment in my involvement with Henley, which embraced me as a visitor 22 years ago.” He has supported the Rotary club by connecting it to philanthropists.

“It’s about networking,” he said. “I try to find philanthropists and link them up with particular charities.”

Mr Prior said: “It’s a rare opportunity to recognise someone who has done an awful lot for the club over the years.

“He has supported our charitable efforts financially. The money which goes into our club enables us to support other charities both nationally and internationally.

“He has been an unsung hero and a major benefactor. We think he deserves it because he’s in the background supporting us and doesn’t seek any personal credit.”