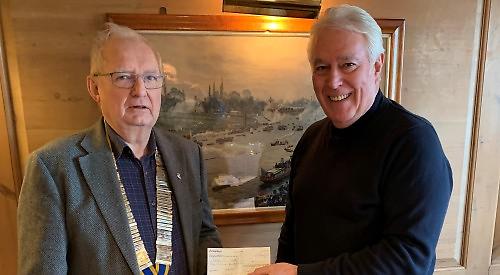 AT Henley Rotary Club’s recent lunchtime “drop-in” meeting, president Barry Prior was pleased to present Phil Fletcher, chairman of the Henley Sea Cadets, with a cheque for £500.

The cadet unit is based at TS Guardian, off Wargrave Road. The money will go towards running costs as the unit receives no government or other official support.

At the club’s previous week’s twilight meeting, the president was delighted to induct two new members, Brenda Gaunt, whose designation will be charity administrator, and Jeremy Gaunt, whose classification will be journalist.

After the inductions, Brenda and Jeremy were welcomed and greeted with enthusiasm by the members of the club.