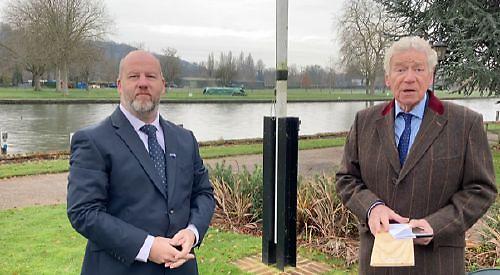 IF you thought 2020 could not get more bizarre, how about this?

Henley Rotary Club has welcomed its newest member in a ceremony that required a piece of wood.

Standing on the bank of the Thames at Phyllis Court Club, Jonathan Taylor-Sabine was inducted as a Rotarian when club president Nigel Hay handed him his new Rotary badge attached to the wood in order to ensure a safe distance under the covid-19 safety regulations.

The effect was ruined a moment or two later, however, when both men forgot the protocol and shook hands.

It was all captured on video to show to the other members at what has become their regular Tuesday night Zoom meeting.

Jonathan is a long-time resident of Henley, having moved here in 1982.

He attended Shiplake College and then went on to The Henley College to do his
A-levels. After starting his career as an apprentice/junior reporter at the Henley Standard, Jonathan soon ditched journalism for the pull of the City. He was an executive at ICAP and a vice-president at IHS Markit Environmental Markets.

Today, he is involved in two start-ups aimed at helping young people.

He lives in town with his daughter and a long-haired German shepherd.

Henley Rotary Club, which has a local and international focus on improving health, supporting peace, promoting education and protecting the environment, among other issues, has met covid-19 restrictions head on this year with a series of public webinars designed to educate and stimulate.

Topics have included rebuilding a hospital in devastated Beirut, supporting local families through the Nomad food bank and sustainable auto racing with Formula E. A full list is available at https://henleyrotary.club/
webinars.html

For more information, including how to get your own piece of wood, email Phil Fletcher at phil.fletcher@btinternet.com