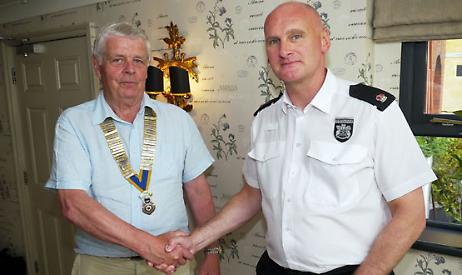 CRIME in the Henley area has dropped by 30 per cent over the past decade.

The news was delivered by Supt Andy Boyd, of Thames Valley Police, when he spoke to Henley Rotary Club on Tuesday.

He said South Oxfordshire and the Vale of White Horse district had the second-lowest crime rate in the South-East.

The burglary rate had dropped by 45 per cent in the past 10 years and there had been no break-ins in Henley town centre since March.

In one recent case, officers made a point of visiting some suspects every day and would follow them.

They complained and complained but I dont give a damn, said Supt Boyd. I made it clear that if you commit crime you ruin peoples lives, so we were going to ruin theirs. We will push the boundaries of what is lawful to make criminals lives difficult.

He said: This is one of the safest places in the country to live, bar anywhere, and I dont know why we dont promote that more. My challenge is to maintain this and I need your help to do that.

David Rusman gave the vote of thanks.