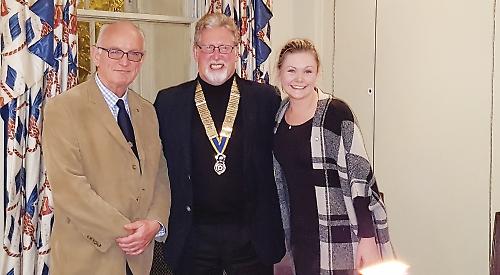 They are Dennis Craggs, a retired accountant from Medmenham, and Annette March, who runs the White Garden flower shop in Hart Street, Henley.

In welcoming them both, Mr Scott announced that their Rotary classifications would be accountancy and floristry respectively and that Dennis would be assigned to the club’s community service committee and Annette would be asked to serve on the youth activities committee.

Maurice Robins gave details of the arrangements for running the mulled wine and hot dog stall at the Round Table fireworks display at Swiss Farm in Henley at the weekend. He also appealed for assistance and for prizes for the charity bingo evening to be held at Henley town hall on Friday, November 18.

Both of these are annual commitments for the club.

Members agreed to continue, for the time being, with the pattern of meetings (alternate weekly lunch and twilight meetings at the Red Lion Hotel) in order to satisfy all preferences.