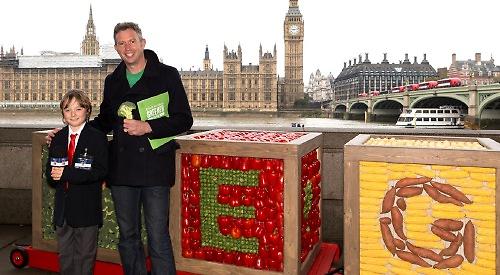 A CHILDREN’S food company is urging the Government to place a greater focus on healthy eating in babies and toddlers.

A delegation from Ella’s Kitchen, which is based in Rotherfield Greys, visited Westminster with three giant building blocks made of vegetables to highlight their importance in children’s diets.

The group, which included about a dozen children, also delivered a policy paper urging the Department of Health to place greater emphasis on introducing vegetables as soon as possible during a child’s weaning period.

The stunt was part of the company’s Veg For Victory campaign in which it is encouraging parents, retailers and healthcare workers to publicise the benefits of vegetables.

Company founder Paul Lindley said: “As a nation, we must look at the very start of when babies start to explore food as this is where relationships with food, both good and bad, are formed.

“We were disappointed that the Government’s recently published childhood obesity plan didn’t include anything around this vital period as our research has shown this is a crucial time for influencing children’s long-term health.”

The company, which is based at Greys Green Farm, was launched in 2006 and is named after Mr Lindley’s daughter.