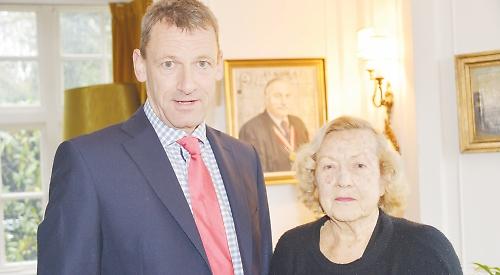 TWO Henley rowing clubs are to stage a new race to commemorate one of the most influential men in the sport.

The inaugural race between the two clubs, in his name, will take place on the Henley Reach on March 26 as part of the Henley Boat Races between crews from Oxford and Cambridge universities.

The coxed eight will row side-by-side about 2,000m downstream from Phyllis Court Club’s riverside pavilion to just past Temple Island.

Mr Sutherland’s son, Justin, who is the current captain of Upper Thames, came up with the idea.

He said: “I spoke to Leander and the organisers of the boat races and everybody was very supportive of the idea, which was great.

“We have agreed that the race should be a club standard otherwise Leander could field seven of the Olympic eight, which wouldn’t be much fun. It is meant to be for those below international standard who are in development so it is worthwhile for everyone taking part.”

Mr Sutherland’s widow, Diane, who is now president of Upper Thames, said she was proud that her husband was being commemorated and that her son had wanted to organise the race.

“Both have done great things at Upper Thames,” she added. “There is also a neighbourly rivalry between the two clubs as they share the Henley Reach.”

Members of the winning crew will each receive a medal designed by Mr Sutherland’s daughter-in-law, Nicola.

The front features the Leander hippo standing on top of the Upper Thames logo of the merged faces of Thamesis and Isis that are carved on the keystones on either side of Henley Bridge.

On the back will be an image of the bridge with a symbolic view of Temple Island through the central arch. Each medal will be about 7cm in diameter and will be inscribed with the words “Peter Sutherland Memorial Race”.

Walter and Rosie Scott, from Remenham, who are members of both clubs, have paid to produce the medals, at a cost of about £100 apiece.

Mr Sutherland Jnr said: “We are extremely grateful for the Scotts’ generosity.

“The medals look stunning, something really worth winning. Anyone who wins one of these will be able to enjoy it for the rest of their life.”

The race will be umpired by Chris Drury, from Remenham, who was a member of the official jury for the rowing at the London Olympics in 2012.

He is a member of both Leander and Upper Thames, and during his own rowing career in the Seventies and Eighties won two world championship gold medals and the Thames Cup at Henley Royal Regatta twice.

Mr Drury said: “I was so grateful for the encouragement Peter gave me in the early days.

“His enthusiasm for the sport and the benefits it brings to people from all walks of life was infectious and it is most appropriate that he should be honoured in this way.”

Mr Sutherland was a member of Leander for 70 years and founded Upper Thames to help improve the standard of rowing on the upper reaches of the Thames as the Tideway clubs were then much stronger.

His son said: “My father did a great deal to develop the sport in Henley and enjoyed very close links with both clubs.

“He became a Leander member in 1943 and, bearing in mind that next year will be Leander’s 200th anniversary, he was involved with the club for more than a third of its illustrious history.

“His real legacy, though, was his sense of purpose, encouragement and humour, which he shared with so many people on the river and in the town.

“A race between the two clubs down the historic Henley reach is a fitting way to pay tribute to his memory.”

Jeremy Randall, president of Leander Club, said: “Peter Sutherland was one of the most influential rowing men on the Henley Reach for so many years.

“He served as captain at Leander before laying the foundations of Upper Thames Rowing Club to help bring together athletes from different backgrounds.”