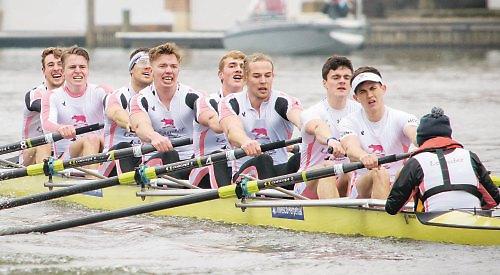 Leander put in the fastest time of the day as they won the elite eights while Henley picked up seven wins, six on their own and one as a composite crew with Upper Thames.

In all 201 crews competed in two divisions along the 3km course from Greenlands to the Royal Regatta finish. The racing took place in good conditions in contrast to last year when the event was cancelled due to high river levels and the fast flowing stream.

The Leander eight took the honours in the elite event as they crossed the line in 10 minutes 23 seconds, six seconds clear of Henley. The Leander crew, made up of Jonathan Jackson, Bertie Woodward-Fisher, Ricardo Clark, Callum Johnson, Harry Higginbottom, Fin Stevenson, Tom Wiblin, Paddy George and cox Sam Royston are aiming to compete together for the club in the Thames Cup at this year’s Henley Royal Regatta.

Upper Thames put in a strong showing with both the men’s and women’s senior crews finishing second in their categories to strong opposition with the women losing to Tideway Scullers by only a second and the men to Pembroke College by a slightly larger margin.

An Upper Thames/Henley composite Masters E coxed four won their event by more than a minute in a time that was faster than the majority of the senior crews racing. The crew consisted of John Ewans, Rob Wilson, Mike Jennings and Peter Jacobs coxed by Davina Guinness.