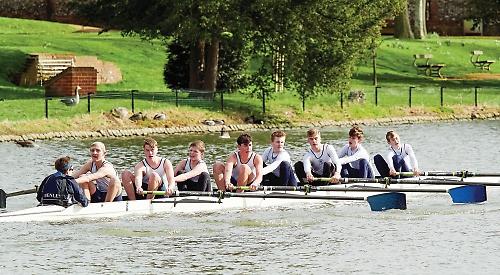 LEANDER CLUB athletes had a strong start to their spring season last weekend, with two first places at the Reading University Head.

Racing as Star and Arrow, the Leander Development Academy, Robbie Crowther, Tom Placidi, David Few and Tom Ballinger took a tight verdict ahead of Windsor Boys’ School to claim victory in J18 quads, with the field of nine including two more Leander crews.

Three of the athletes were able to claim a double victory when Cameron Forsyth climbed in to the two seat to replace David Few and the line-up took an even more convincing victory ahead of Marlow to win IM2 quads.

After their victory at the Henley Head the previous weekend the Leander Thames Cup group were expecting stronger opposition, and so it proved. Oxford Brookes, who boated 14 crews in various boat classes, took a 10-second verdict ahead of Star and Arrow.

Brookes also pushed Leander back into second place in the elite event, where a depleted Ladies’ Plate group were making their first appearance on the water this season, after spending the closed season in small boats. Sickness and injury also played their part, with two members of the Thames Cup crew having to step up to fill the vacancies.

Their performance was almost matched by the second WJ18 boat from Henley racing in the WJ18 8+ who came a strong second place behind Marlow. Henley’s J15 girls also showed they could follow their example. They were forced to race up a division at J16, as there was no opposition for them in their age group. They finished only four seconds behind Marlow in second behind a strong winning crew from Latymer Upper School.

It was tough going for the J18 quad, which comprised Balthazar Issa, Bruce Turnell, Euan Turnell and Ollie Taylor, as they were racing above their age group. They initially struggled to find the right rhythm in the gusting conditions but managed a very creditable sixth against some very good opposition.

Henley’s Elite men were hampered by injuries but put in a good performance against tough competition from Thames, Leander and Oxford Brookes rowing clubs.