Henley juniors and masters star at Head of River races 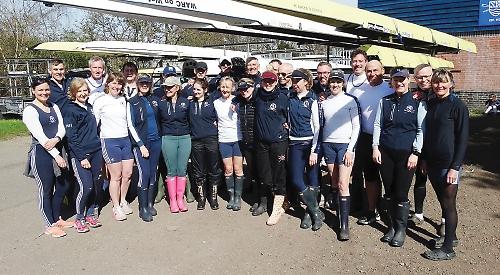 HENLEY Rowing Club are celebrating wins across all junior and masters’ squads at The Schools Head, The Junior Sculling Head and the Vesta Veterans’ Head held last weekend.

The racing started on Thursday at the Schools’ Head on the boat race course. Henley’s junior girls were there in numbers at both events and came away with the medals in every category in which they raced.

Thursday’s race, which should have been run over the boat race course, had to be significantly shortened due to the strong winds, making conditions dangerous on parts of the course.

In the top girls’ event, the Championship Eights, the crew of Lauren Kay, Ella Morgan, Lottie Orr, Georgie Robinson Ranger, Mary Wright, Georgia Edwards, Clare Pearson, Issy Jonnson and cox Freya Reid picked up the silver medal behind Headington, but these two crews were well clear of any other opposition.

On Friday, both the girls and boys competed at Dorney at The Scullery, racing two 1,900m legs of the course. The wind that thwarted the men’s head did not stifle Henley’s squads who took home some fantastic victories.

The WJ15 squad, who had finished fourth in their eight at the schools head, split into two quads and the crew of Georgia Brown, Carla Russell, Amber Weller, Hannah Hills and Freya Reid as cox, took gold beating 71 other crews in the event, whilst the crew of Jess Roberts, Phoebe Snowden, Amy Howard, Hazel Drury and Ella Nelson as cox, finished seventh of the 71 and took the silver for second boats.

The medal tally for the girls over the two days was five golds, four silver and one bronze, with everybody who competed on both days taking home a medal.

The winning ways of the girls were continued by the boys, who were also competing at the Junior Sculling Head on Friday.

With a massive entry of 66 boys’ crews from all over the country, the Henley J15 A quad of Euan Turnell, Grant Taylor, Ed Roy, Dan Crick and cox Charles Washbourn won a silver medal, missing out on the gold by just four seconds. The B quad of Sam Beattie, Alex Carr, Charlie Garnham, James Penrose and cox Chloe Beeton won gold in the B event and 15th overall, sculling a very controlled and technically solid race. So to come away with both quads receiving medals was an outstanding achievement at this national event.

It was then the turn of the mums and dads at the Vesta Veterans’ Head. This Mother’s Day treat was particularly sweet for the mother and daughter that competed in the Women’s Mas D category. Bethan and Linda Thomas both rowed in the event, with Bethan’s younger sister Katie coxing. They had a great row finishing sixth out of 16 boats competing. There were also some strong performances from the Mixed Mas C boat, finishing third and the Master Novice boat finishing second. As ever Henley’s Masters were willing to join forces with other clubs to provide a potent winning mix. A combination women’s crew featuring Henley rowers won the WMas E and a composite came second in the Mas D category. This boat was the ninth fastest on the day.

Meanwhile, an experienced Upper Thames women’s crew won the D category of the Veterans’ Head with a time of 14.43, two seconds ahead of rivals Wallingford. Equally impressive was the overall fourth place of 59 women’s entries.

The men’s D crew also had a strong row, finishing in ninth place overall, not quite fast enough to beat a Molesey crew of ex-international rowers that came in 12 seconds ahead and second overall.

The F category crew comprised of a number of ex-world champions and Henley winners also came in a close second, and a fifth crew finished half way up the “E” category.

l The men’s Head of River Race on Saturday was cancelled due to strong winds.