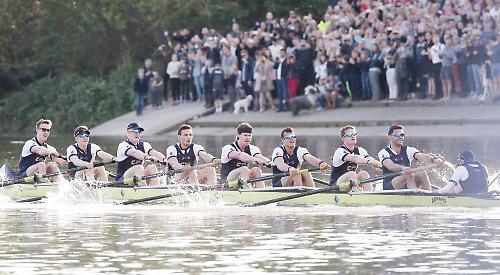 Oxford won the men’s race by the tightest margin for 10 years, while Cambridge romped away with a win in the women’s race after a disastrous start by the Dark Blues.

The women’s race turned into a foregone conclusion after the Oxford four-seat, Rebecca Esselstein, caught a boat-stopping crab off the start, and Cambridge powered off into the distance.

Starting on a fast-flooding tide is a key part of the race, practised endlessly by both crews, thus dispelling any suggestion that the race should have been restarted. Cambridge, whose crew included Irish Olympian Claire Lambe in the three seat, went on to win by 11 lengths in the record time of 18 minutes, 33 seconds.

Three former Leander athletes took their places in the Oxford men’s crew which was looking to avenge last year’s defeat while Cambridge were attempting back-to-back wins for the first time in almost 20 years.

The Dark Blues’ crew included Vassilis Ragoussis at stroke, with Josh Bugajski at four, while their bow man was Durham graduate and former Cambridge Blue Will Warr – only the third man in the history of the race to have rowed for both universities.

Oxford settled into a strong rhythm and moved out to a half-length advantage before Cambridge used the inside of the Middlesex bend to reduce the deficit to just a quarter of a length.

Both coxes now steered aggressively, giving umpire Sir Matthew Pinsent plenty of exercise for his flag arm. A clash of blades beneath Hammersmith Bridge briefly threw Oxford’s rhythm but they held their nerve around the bend and tried to seal the result. But Cambridge were not out of the running, maintaining contact all the way to Barnes Bridge where they got the overlap they required. For a moment it looked as though they might turn the race around, but Oxford looked confident as they held on to win by one-and-a-quarter lengths.

“It was a really tough race – it feels good but I’m exhausted,” said Will Warr afterwards. Bugajski added: “It was a good clean start – we really controlled it but Cambridge gave us a good race.”

The two men won’t have much time to relax – they are now climbing into a pair together and hope to make their mark at GB trials at Caversham in two weeks’ time.