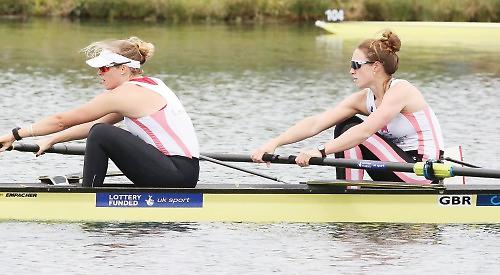 LEANDER athletes were in fine form at the weekend, winning all six events on the card at GB national trials.

The April leg of GB Trials, staged at Caversham, gave all athletes in contention a final chance to impress the selectors before the first of the season’s major international regattas.

Olympic silver medallist Vicky Thornley began the string of Leander success in the women’s single sculls, where she won a tight race against her clubmate, U23 world champion Jess Leyden. Thornley quickly took the lead but a spirited fightback saw the gap narrow to one third of a length on the line.

A few minutes later it was the turn of John Collins to take a win in the men’s event, where five Leander athletes lined up on the start line with Josh Armstrong of Edinburgh University.

For a while it seemed that the Scot might cause the biggest upset of the day, leading the strong field at the halfway mark, but the more experienced Olympians came through the field, with Collins crossing the line ahead of Jonny Walton and Jack Beaumont.

Olympic champion Kat Copeland dominated the lightweight women’s singles, winning by eight seconds from Putney Town’s Charlotte Booth. Copeland, a gold medallist at London 2012, is newly arrived at Leander after moving south from Tees RC, and is looking ahead to further success after a disappointing result at Rio 2016.

There was another tight finish in the men’s lightweight singles, where Leander’s Sam Mottram pushed eventual winner Will Fletcher all the way to the line.

Fletcher, who partnered Richard Chambers to seventh place in the GB lightweight double at Rio, admitted it was a good start to the season.

“It’s case of onward and upward – I’d like to get back in the double and put ourselves in a good position for the World Cup season because it wasn’t what we wanted in Rio,” he said.

“I’m obviously really happy with the win – there are new girls coming through the system and I’m aware of what might have happened but it was a controlled race, we went out and killed it in the middle,” said Bennett afterwards.

The sixth Leander win of the day came when Olympic champion Will Satch partnered Molesey’s Moe Sbihi to victory in the men’s pairs, edging out Jacob Dawson and Matt Rossiter on the line.

“These were fabulous results for Leander but what’s important is the pipeline coming through the system. Three quarters of our athletes at trials had never competed at an Olympics, while 12 of them are still in our development system, training at the club,” said chief coach Mark Banks.