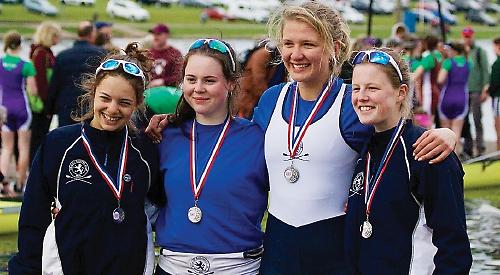 HENLEY Rowing Club’s junior women, representing the Thames Upper Region at the Junior Inter-Regional Regatta in Nottingham, came away with three gold medals and a silver.

This was followed by the J16 quad of Esther Morgan, Sophia Hahn, Jess Arlett and Emeline Warner, who were lying in the bronze medal position after the semi-final and with a fine performance in the last 500m turned it into silver.

Next up was the J16 coxless four of Amelia Crick, Phoebe Fletcher, Amber Weller and Caoimhe O’Donohue. Due to problems with a blade in the semi-final they thought they may not have made the final, but all that was forgotten after 750m when they moved through the pack to claim gold.

The last race was a crew of Jess Roberts, Hanna Hills, Sophia Hahn, Carla Russell, Georgia Brown, Amy Howard, Natalie Cooper, Hazel Drury and cox Ella Nolson. These are all J15s bar Sophia Hahn and cox Ella Nolson, but were racing in the J16 division. The race was a true battle up to 1,000m with Henley dead level with a composite crew from Kingston Grammar School and Kingston Rowing Club. Henley then pushed their noses in front and they went on to claim gold by one length.