Henley show their strength in depth at local regattas 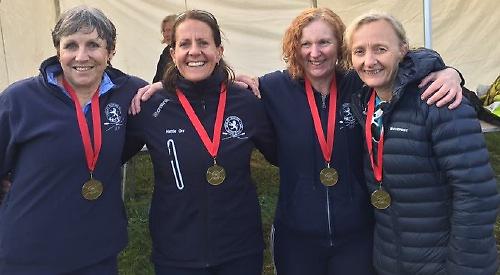 HENLEY Rowing Club, fielding crews of all ages and experience, came away with 13 wins from the Marlow Spring regatta and Wallingford regatta.

First up were Henley’s junior boys’ squad, who produced a strong set of results at Marlow Spring with four wins and three other finals reached.

It was the first regatta for the J13 boys. The boys’ double with Ollie Deacon at bow and Jamie McLellan at stroke won their event, racing against two Falcon doubles who were part of the quad which beat them at the Abingdon Head. They were neck and neck over the first 500 metres of the race, but pulled away to win convincingly over the second half of the course.

The winning Henley boys then joined up with Cameron Smith and Elio Del Largo with cox James Oldham, to deliver another convincing win, that saw them pull away over the second half.

In the intermediate three single sculls, Henley’s J17 Bruce Turnell dominated both his races from the off, winning his final comfortably from two scullers from Latymer Upper School. Fellow squad members, Oliver Taylor and Balthasar Issa, fresh from their silver medal scull at the Junior Inter Regional Regatta, also dominated their J16 double scull races, coming home well ahead of the second place boat from Star and Arrow.

In J15 Henley single scullers had a first and second result, with Grant Taylor, a bronze medal winner at the Junior Inter Regional Regatta, winning strongly with his team mate Tom McLellan sculling with good technique in second place.

In J14 single sculls Dan Crick sculled well through the choppy conditions to win his event beating a fellow sculler who had previously won the Junior Inter Regional Regatta.

The A and B J15 quadruple coxed scull and the J15 double sculls all made their finals as did both of the J14 doubles, but neither could fill the top slot in a three-boat race.

Henley’s junior girls were also out in force with wins in the women’s intermediate three eights and WJ15A double sculls.

The club’s victories were not confined to the junior squads at Marlow. This year Henley boasted some strong performances amongst its women’s masters squad with three wins and four crews making finals.

The squad had its first win of the day in the women’s masters C novice coxed quad event when Louisa Clarke, Emma Alvey, Karen Wade and Jan Watson, coxed by Charles Washbourn, beat crews from Walbrook and Staines. This was followed swiftly by Helen Turnell and Niki Orr winning convincingly in the masters D double sculls final, against strong opposition from Eton Excelsior and Falcon RC.

In the last race of the day, following a downpour in the heats of masters E coxless quads it was an all Henley final. The winning crew was Helen Turnell, Niki Orr, Linda Thomas and Valerie Bennett. Across the full Marlow Spring Regatta, Henley had 12 wins.

The senior men’s squad were not to be outdone. Michael Nagi and his sculling partner Dave Lambourn won the Chairman’s Challenge Cup in the club double sculls at Wallingford.

The race was shortened to 1,500m due to a strong headwind but this did not dampen what turned out to be an epic race. They were pitted against a strong crew from Broxbourne who started with a lead. Inch by inch it was drawn back in by Henley, who then proceeded to edge ahead. Broxbourne made a push for the line but by then Nagi and Lambourn had victory in their sights.