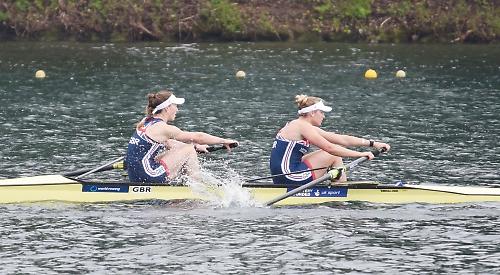 THE international season got underway in fine style for Leander athletes last weekend, when the major events in Serbia and Belgium brought yet more gold medal success.

Twenty-three of the club’s athletes returned with medals from the first World Cup regatta of the season, staged in Belgrade, where Great Britain topped the medal table with gold in 11 different events.

Leander’s Karen Bennett and Holly Norton confirmed their premier position in the women’s pairs after their win at GB trials. In Sunday’s final they faced a tough battle against two Dutch crews but led the race throughout to take their first gold medal of the season.

It was a similar story in the men’s event where Matt Rossiter and Jacob Dawson put out the home favourites, Nenad Bedik and Milos Vasic, to take first place by just over a length.

Olympic champion Will Satch was selected in the new-look GB men’s four with Molesey’s Moe Sbihi, and Mat Tarrant of Oxford Brookes. With Leander’s Callum McBrierty stepping into the line-up in place of an injured Stewart Innes the crew overhauled Spain and the Netherlands in the second quarter, moving on to win, more than a second clear of the Dutch.

Leander’s fourth gold medal came in the lightweight men’s doubles where Will Fletcher partnered Peter Chambers of Oxford Brookes to take a one-second win ahead of Poland and the Czech Republic. Ireland’s O’Donovan brothers, Gary and Paul, the Rio silver medallists, finished fourth.

The 2012 Olympic champion Kat Copeland and her Putney Town partner Charlotte Booth took silver behind the Polish crew who won the B final in Rio, while the second GB double, Maddie Arlett of Edinburgh University and Emily Craig of University of London, secured bronze.

Back in the single scull at an international competition for the first time in three years Leander’s Vicky Thornley put in an impressive finishing burst to take the silver medal behind Rio finalist Jeannine Gmelin of Switzerland.

The final race of the regatta brought frustration for the GB men’s eight at the hands of Nereus, the Dutch student crew who were disqualified from the final of the Ladies’ Plate at last year’s Henley regatta. The GB men, with Olympic champion Tom Ransley on board, led by just half a second through the middle of the course before the Netherlands pushed for the line, taking victory by 0.68 seconds.

Meanwhile the Leander development academy were making their own mark in Belgium, where the large British entry at Ghent Regatta offered club crews the chance to test themselves against top-quality opposition at the start of the season.

When Edward Gleadowe, Barney Stentiford, Sam Twine, and George Rossiter won gold in men’s fours on Saturday, their win was matched by Ed Fisher, Jonathan Cameron, Jamie Kirkwood, and Charles Waite-Roberts in the quadruple sculls. Fisher them climbed in to his lightweight single to record another win the following day, when Saskia Devereux and Kesiah Roe also recorded gold in U23 women’s double sculls.