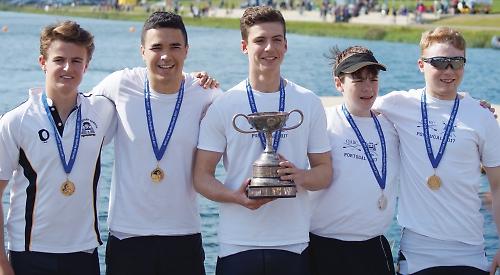 THE Oratory School ran out winners of the Ball Cup at Dorney Lake. The school four of Will Daniel, Brandon Archer, Ben Anidjah, Louis Kibble and Henry Stone set the course record winning the boys’ coxed fours event by more than seven seconds.

In the morning, the U14 and U15 coxed quads raced well and narrowly missed out on final positions but gained invaluable experience for later in the season.

In the double sculls event, Harry Kibble and Joseph Staples beat some well established doubles to finish third in their semi-final. Harry’s brother, Louis, teamed up with Matt Mackay to race in the J18 doubles event, where they came away with the bronze medal.

One of the last races of the day was the U16 coxless quad where Sam Machin, Matt Mackay, Edward Tritton and Joseph Anidjah rowed well in blustery conditions to win the silver medal.