Morgan and Wright lead the way at Munich junior regatta 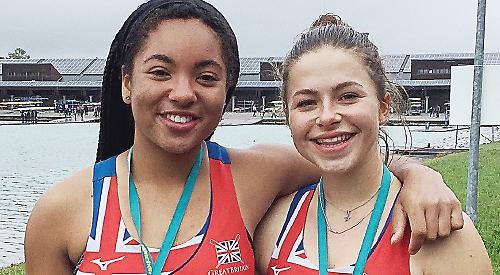 THE junior squads of Henley Rowing Club recently took to the international stage with crews competing in Munich and Ghent where they tasted success in both events, returning home with 10 gold medals, two silvers and a bronze.

As part of the selection process for this year’s junior GB team, Ella Morgan, Mary Wright and Lottie Orr were asked to represent Great Britain at the Munich junior regatta.

Wright and Morgan competed across the two days in pairs and fours and Orr in doubles and quads. Morgan and Wright triumphed in their pair while Orr finished fourth in the quad.

Meanwhile in Ghent, the rest of the girls’ squad plus Lachlan Reid from the boys’ squad were winning gold medals in just about everything they entered.

In junior women’s singles, Georgie Robinson Ranger had a comfortable victory of more than 26 seconds. The following day saw her win once more but her winning margin was much reduced by her team mate Issy Jonsson who finished second. Laclan Reid also put in a good performance to finish in the top 20 amongst the huge field of single scullers at both regattas

Competing above their age in U23s pairs, Georgia Edwards and Clare Pearson had a comfortable victory on both days against Molesey.

Moving up another category to open women’s fours, Edwards and Pearson were joined by Lauren Kay and Georgie Robinson Ranger. The crew did well getting to the final of this open event and finishing in third place behind the top boats from Molesey and Tideway Scullers. Lauren Kay finished third in the U23 single sculls on Saturday.

Back in junior events Clare Pearson was joined by Alice Jones in the pair to win Saturday’s event comfortably.

In junior women’s quads on Saturday Tilly Lock, Phyllis Barter, Georgie Robinson Ranger, and Issy Jonsson — from a field of 19 entries — had a two-second win over New Ross RC of Ireland. On Sunday Alice Jones replaced Robinson in the quad and another gold was sneaked with a 0.25-second victory over Sporting Dunkerquois of France.

Henley’s first medal came from the J15 double sculls where the boys’ squad secured bronze. The crew of Ed Roy and Dan Crick had to cope with a difficult crosswind and a slow start but as the race progressed they advanced through the field to finish third with a strong last 500m charge.

Grant Taylor in J15 single sculls finished fourth in his A final, narrowly missing a medal in a high quality field.

Two junior girls’ crews were also competing and both reached the A final after the morning time trial. The crew of Georgia Brown, Amber Weller, Carla Russell, Hanna Hills and cox Freya Reid, stormed out and had themselves a quarter-length lead at 500m, this they increased to half a length by 1,000m and even though pressed hard in the last 500m by Latimer Upper School, maintained it to the finish.