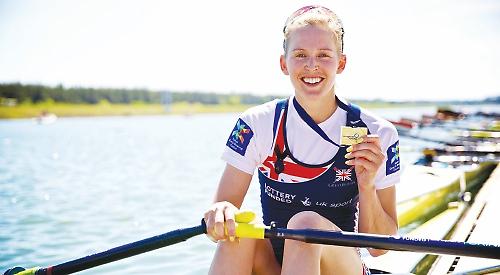 After winning her heat, Thornley qualified direct for the final where she lined up alongside London 2012 silver medallist Fie Edby Erichsen of Denmark.

It was the Rio Olympic quads champion Annekatrin Thiele, of Germany, who made the early running, storming off the blocks and establishing a clear lead over Erichsen after 500m.

By halfway the Danish sculler had taken over the lead before Thornley lengthened out with just 500m remaining.

As she began to build towards the line the Belarussian double Olympic champion Ekaterina Karsten, 44, put in a stunning push to move in to the medal zone. Thornley hung on for gold, with Karsten taking silver ahead of Thiele, forcing Erichsen back into fourth place.

The venue in the Czech Republic held fond memories for the GB sculler, who won a world title at Racice in 2009 as a member of the GB U23 women’s eight.

Thornley said: “It felt a bit strange to come back to Racice and win again — I’ve taken a lot of strokes since the last time.

“It was amazing to line up alongside so many big names, and then to race them and be competitive, but to stand on the podium with them was a great honour, and to be in the middle was pretty cool!”

The GB women’s quad picked up a bronze medal earlier on Sunday, having pushed the Netherlands to the line for second place.

Leander’s Holly Nixon, Jess Leyden and Beth Bryan, together with Mathilda Hodgkins-Byrne, of Reading University, sat fourth at the halfway mark, but upped the pace to move past the Polish crew and challenge the Dutch for silver.

London 2012 champion Kat Copeland and her new doubles partner, Emily Craig, of University of London, also battled well for bronze in the lightweight women’s double, having also been fourth at 1,000m. At one point the duo were pushed back into fifth place, but moved through to take third by over a second.

Britain’s final medal came with the all-Leander women’s pair of Holly Norton and Karen Bennett, who took third place in a final dominated by Romania.

The top three crews rowed away from the rest of the field, but GB were unable to move past second-place Denmark in the final quarter of the race.

The championships ended in disappointment for the GB men’s squad who all finished out of the medals. The four finished fifth in their final, while the men’s pair, Jacob Dawson and Matt Rossiter, came up against the experienced Italian bronze medallists from Rio 2016 and finished fifth.

The men’s quad were involved in a blanket finish for bronze in their final, and slipped back to fourth on the line. GB and Norway were split by less than half a second in the battle for third place with Italy, who duly delivered.

While the results will have given the coaching team food for thought, the record books reveal a pattern of less successful results at the start of a new Olympic cycle.

At the Lucerne World Cup in 2013 only one Leander athlete won a gold medal while four years earlier in Munich, there was no Leander gold at all.