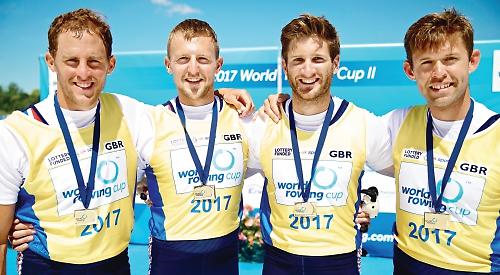 THE all-Leander GB men’s quad scull won gold at the World Cup regatta in Poland last weekend, where 13 other Leander athletes medalled, to help keep Great Britain at the top of the season’s standings.

GB trials winner John Collin, sidelined through injury at the Europeans three weeks ago, was back in the crew alongside Pete Lambert, Jonny Walton and John Collins.

After winning their heat in Poznan they pulled away from the field in the second 1,000m of their final to claim the gold.

Speaking after the win Lambert said: “We are all returning Olympians who didn’t achieve quite what we wanted in Rio so there’s a desire and a hunger to do good things in this boat.”

Single sculler Vicky Thornley continued her run of success, winning the silver medal behind Austria’s Magdalena Lobnig who recorded a World Cup best time of 7 minutes, 13.26 seconds in the final.

Thornley, who took the European title last month in the Czech Republic, beat the Olympic bronze medallist Duna Jingli of China, who took the bronze. Thornley said: “That was certainly the fastest I’ve done — it wasn’t good enough for the gold today but we’ll go back and figure out how to go even faster.”

The GB men’s four, with Leander’s Matt Rossiter newly promoted to the bow seat with Moe Sbihi, Mat Tarrant and Will Satch, made a step up to take silver after the disappointment of fifth place at the Europeans.

With Satch back in the stroke seat they rowed solidly but could not overhaul Australia, who led from the start. A closing sprint from the British four was too late to prevent Australia crossing the line half a length ahead, with Satch’s men having to be content with silver. With Holly Norton taking a break from the women’s pair through injury that left her partner Karen Bennett to step into the women’s eight, the crew in which she won silver at the Rio Olympics.

The eight duly delivered another silver medal behind New Zealand, while the USA, who have dominated this boat class for more than 10 years, were pushed back into third place.

GB’s final medal success came in the last race of the regatta with the men’s eight, with seven Leander men on board, winning bronze behind Germany, the Olympic silver medallists.