Chairman to the rescue and other colourful moments 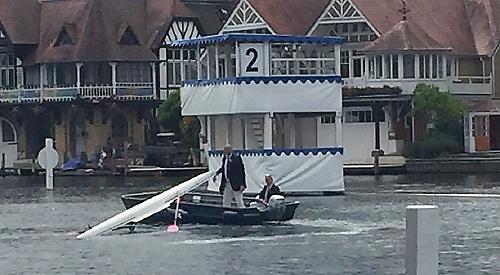 BEING chairman of Henley Royal Regatta doesn’t stop Sir Steve Redgrave from getting his hands dirty.

The five-time Olympic champion literally had to take matters into his own hands during Friday’s qualifying races.

He was ferried on to the course to rescue a single scull that had capsized close to the finish line.

Henley Rowing Club tweeted a picture of his mission, saying: “A bit of an extra obstacle for diamond challenge quali when #543 took a dip at course end. #SirSteve to the rescue! #ScullObstacleCourse.”

On Wednesday, the opening day of the regatta, the question of steering, which often prompts debate among the rowing fraternity at Henley, showed its face again.

It always pays to learn the nature of the course and several crews struggled to stay on their station, with clashes and warnings keeping the umpires busy. St Neots Rowing Club even had their bow-number sliced off after colliding with Akademischer RV Westfalen of Germany in their Wyfold Challenge Cup race.

Despite this, Westfalen won by half a length.

In the Princess Elizabeth Challenge Cup, St Paul’s School escaped a near-catastrophe when one of its crew came off his seat mid-race but still they beat Dulwich College by one-and-a half lengths.

In the same event, there was jubilation for Shiplake College who gave their all to defeat Westminster School by two-thirds of a length.

The crew are in a rich vein of form, having secured bronze at the recent National Schools Regatta, pushing their Henley rivals into fourth place on that occasion. Indeed, they didn’t seem fazed, which is perhaps all the more surprising when they knew that many of their fellow students were packed into the college sports hall to watch the race live online.

The college posted a video of the scene after the crew crossed the finish line with everyone up on their feet to cheer them home.

Headmaster Gregg Davies admitted that he shed a tear.

Meanwhile, brightly coloured outfits are not unusual at the regatta but one crew still managed to turn some heads.

Dutch outfit K.A.R.Z.V De Hoop, who defeated Fulham Reach Boat Club in the Wyfolds, were the subject of much discussion for wearing leggings.

One crew member said: “There’s this person in Amsterdam who came up with the idea of our colourful leggings when drinking wine with the crew 10 years ago. He was Scottish and always wore a kilt.”