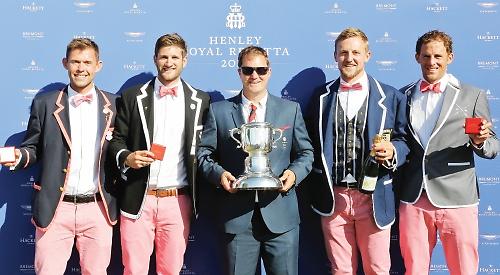 THIRTY-FOUR Leander athletes have been named among the GB team that competes this weekend at the third World Cup regatta of the season in Lucerne, Switzerland.

The all-Leander men’s quadruple scull survives unchanged after an impressive gold in Poznan three weeks ago, followed by their winning the Queen Mother Challenge Cup at Henley last weekend.

Jack Beaumont, Jonny Walton, John Collins and Peter Lambert, who are coached by Paul Stannard, return to the boat as World Cup leaders in the event, four points ahead of the Dutch, who they beat in Poznan. Other boats unchanged for Lucerne include Leander’s Vicky Thornley in the women’s single, where she will be looking to match her European title with gold on the Rotsee. She will first need to beat Austria’s Magdelena Lobnig, who took gold in Poland, and also Annekatrina Thiele of Germany, who beat Thornley to the Henley title last Sunday.

The GB men’s four won the Steward’s Challenge Cup last weekend, which will have given Leander’s s Matt Rossiter and Will Satch, with Molesey’s Moe Sbihi, and Oxford Brookes’ Mat Tarrant extra confidence as they look to defend their yellow leaders’ bibs against the strongest competition of the season.

Having won silver in the eight in Poznan, Leander’s Karen Bennett is back in the pair with the return from injury of her partner Holly Norton, while the eight itself contains two changes. Fi Gammond returns after illness kept her out for Poznan, while Anastasia Chitty remains in the eight which is looking for revenge following their Henley defeat at the hands of New Zealand.

The men’s eight, which took bronze in Poland, contains two changes. Oliver Cook comes in to the bow seat having finished his Masters course at Oxford University, with Princeton student Tom George in the two seat.

Tom Barras races the single scull again after his fifth-place finish in Poznan, while Frazier Christie and Leander captain Nick Middleton are partnered once more in the double.