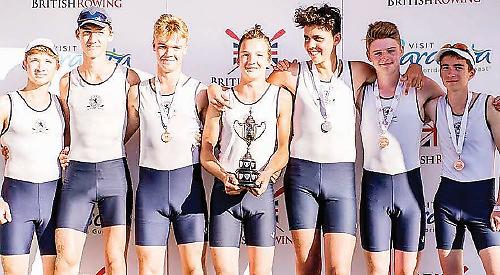 HENLEY Rowing Club retained the Victor Ludorum trophy for the second year running as they were crowned the most successful club at last weekend’s British Rowing Junior Championships.

The Henley juniors returned from the three-day event at the National Water Sports Centre, Holme Pierrepont, with four gold medals, four silver and a bronze to their name. There was also success for Leander Club who secured three gold medals.

A record number of entries saw more than 1,500 junior rowers from 131 clubs compete in the event that started on Friday of last week.

Henley’s first medal came in the WJ18s where Georgia Edwards, Alicia Redman, Grace Johnson and Daisy Butterworth won their qualifying time trial in the junior coxless fours just ahead of Glasgow Academy. In the final, Glasgow and Henley led the rest of the field and in the closing stages Glasgow moved ahead to take the gold.

As the fastest English crew in the race the Henley quad now have the honour of representing England in the Home International Regatta this weekend where they will be joined by Clare Pearson and Issy Jonnson, who were selected from GB final trial to represent England in the coxed four and eight.

In WJ18 quads, the recently formed crew of Amy Sotnick, Rebecca Lister, Alice Jones, and Phyliss Barter were second in the time trials and had a comfortable win in the semis. The final was always going to be tough with the Gloucester crew containing three of the Henley Royal Regatta winning crew. Gloucester and Henley opened up clear water over the rest of the field early in the race, and these two crews were able to have a comfortable paddle into the finish with Henley having to settle for silver behind Gloucester who took gold.

The quad and the four combined with Freya Reid to make up the junior eights and in the time trial Henley finished in second place, two seconds behind Nottingham Rowing Association. This was seven of Nottingham’s first eight that had finished third at the National Schools Regatta and six of Henley’s second eight that had finished in sixth place at the same event. Both crews won their respective semi-finals easily and were drawn in adjacent lanes for the final.

Nottingham led from the start and with 750m gone were three-quarters of a length up, but from this point on the Henley eight started to reel them in. At halfway Nottingham still led but by a third of a length, with 500m to go Henley led by a canvas and continued to pull it out to win with clear water.

The Henley WJ16 and WJ15s managed to get five of their six boats to the finals on Sunday. The first was the J16 quad of Amelia Crick, Phoebe Fletcher, Jess Arlett and Caoimhe O’Donohue, who after coming fourth in the Saturday time trial, couldn’t quite turn it into a medal position after reaching the final.

The WJ15 double sculls of Georgia Brown and Carla Russell and Hanna Hills and Hazel Drury raced well in their time trial, to finish second fourth in a field of 46. The Brown and Russell double took a well fought gold with Hills and Drury finishing fifth. The WJ15 coxed quads of Georgia Brown, Amber Weller, Carla Russell, Hanna Hills and Freya Reid, along with, Jess Roberts, Amy Howard, Phoebe Snowden, Hazel Drury and Ella Nolson, both made the final. In a very tough field, the Brown, Weller, Russell Hills and Reid quad took gold after being pushed hard by Tideway Scullers and Maidenhead. Henley’s other boat in the final finished sixth.

One of the standout performance from the junior boys was John Yolland, who in his first season of rowing reached the J16 A final in his single scull and whilst he didn’t medal, he finished fourth.

The J16 double of Balti Issa and Ollie Taylor — still recovering from racing for GB at the annual GB/France match on Thursday — also made their A final and again made it to fourth place.

It was the same story for two of the J15 quad who were rowing at the GB/France match and in their final James Swinburn, Euan Turnell, Grant Taylor, Alex Carr and cox Charles Washbourn achieved a creditable bronze medal in a tough race.

Leander athletes secured their trio of gold medals in the men’s quads, doubles and J15 doubles.

The Leander double included two members of the club’s Fawley quad which had lost their semi-final at Henley by the agonisingly close margin of just two feet earlier in the month. In their final last weekend Tom Ballinger and Robbie Crowther, who established themselves as clear favourites after winning their semi, sculled the fastest splits all the way down the course to take a five second margin over Chester-le-Street, with Calpe RC of Gibraltar in third place.

Leander had a similar path to the final in the quads event, where Cameron Forsyth, Matt Peters, David Few and Ben Smeeton went on to dominate their final, leading Lea and Warrington at every timing marker. Despite a final spurt by Lea in the closing stages Leander held them off to win by more than three seconds.

The club’s final win came in the J15 double sculls, where Joe Willis and Ed Sharpe recovered after a sluggish start to take the lead in the second half. In the final stretch they pulled away to take a 4.7 second victory over Henley’s Ed Roy and J14 Dan Crick who took silver.