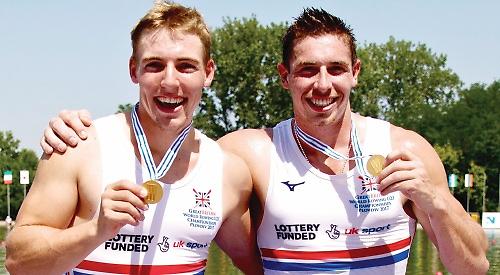 FOUR Leander athletes returned with medals from the World U23 Championships in Bulgaria, where they helped place Great Britain third in the medal table.

Sculling sensation Sebastian Devereux and his partner Sam Meijer of Elizabethan Boat Club stormed to victory in the men’s double sculls, beating France to the line by just a canvas.

Devereux and Meijer sat fourth at the halfway mark, just 0.01 of a second behind Lithuania who had pushed France to the line in Friday’s semi-final. The French were out front and looking good for the win, but the GB men mounted an attack with 250m to go, overhauling Bastian Quiqueret and Maxime Ducret to place first across the line.

Their medal was vindication of their decision to pull out of Henley, where their entry for the Silver Goblets would have meant rowing sweep, marring their concentration in their bid for sculling success.

“We knew with 500m to go that we had the afterburners to use,” said former Westminster schoolboy Meijer. “That won us the gold. It was the toughest race I’ve ever had.” Leander’s Rob Hurn, Charlie Elwes and Sholto Carnegie, with Griffen Boat Club’s Tom Digby, brought home silver in the men’s fours. Australia proved too strong, pushing out to an unassailable lead, but GB held off Austria by a length in the battle for second place.

“That was really tough. We are really proud of how we won the silver in a top class field by really pushing in the second half and putting the rest of the boats behind us,” said Carnegie.

Like the double, all four men are currently studying at universities in the USA, where the chance to pursue their academic studies alongside their sporting goals, without the burden of a student loan, has proved an attractive proposition. The all-Leander men’s quad, coached by Ross Hunter, finished fourth in their final, one place higher than the same crew achieved last year. Andy Joel, Harry Glenister, Rowan Law and Harry Leask led New Zealand in the opening stages of the race but the Kiwis timed their move perfectly to overhaul Russia and Italy in the final quarter to take gold.