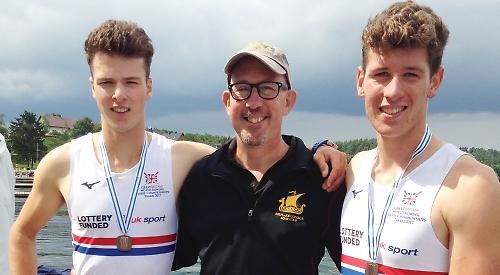 TWO Shiplake College rowers helped the Great Britain junior men’s eight secure bronze at the World Rowing Junior Championships in Trakai, Lithuania that began on Wednesday of last week and culminated in the finals on Sunday.

Henry Blois-Brooke and Seb Newman became the first students from the college to secure a junior world championship medal in Sunday’s final.

With Blois-Brooke in seat three and Newman in seat six, GB had a good win in the heats recording one of the fastest times in the eights.

In the final GB made a relatively slow start in the first quarter of the race but managed to edge their way through the field and crossed the line just inches behind the USA in second, with Germany taking the gold medal.

A delighted director of rowing at Shiplake College, David Currie said: ‘There was a really strong positive atmosphere amongst the whole junior team throughout the championships. It was Great Britain’s best ever performance at the event.

“Henry and Seb’s achievement is one that the school can really be proud of and was a great way to sign off their junior rowing career. This is an achievement for our younger pupils to aspire to and is evidence of what can be achieved.”

Currie also had a taste of success as he coached the men’s four to a gold medal. GB also took gold in the women’s double sculls whilst the men’s quad secured silver.

Shiplake College headmaster Gregg Davies added: “As head I am thrilled to have the boys win bronze and to have our director coaching his first ever gold winning crew. It is the icing on the cake to a fantastic year of rowing for the school.”

Henley Rowing Club also had involvement in the championships with Mary Wright competing in the four and Lottie Orr in the quadrupe scull. The four of Wright, Flo Donald (Lea RC), Hope Cessford (Durham ARC) and Charlotte Fennell (Marlow RC) finished second in their heat behind Croatia and ahead of Greece which secured them a path straight to the semi-finals. To make the A finals the girls needed to finish third in their semi-final. China and the USA set the pace leaving New Zealand, Germany and Great Britain fighting for the third position. In the end New Zealand just pipped GB to take the place in the A final. In the B final Italy took an early lead but never got away from the GB crew and from just after half way the GB crew took the lead to win the B final and seventh place overall.

Orr’s quad with Lucy Edmund (York City RC), Phoebe Campbell (Exeter University BC) and Danielle Semple (Headington SOBC) had a comfortable heat in which they finished second for a place in the semi-finals.

A third place in the semi would see the quad through to the A final and a medal opportunity. Romania led from the start with GB, the USA and Russia remaining close through the second and third 500m but always with GB just ahead of the others. The last 500m saw them secure second place and a place in the A final.

In the final Romania and Germany took the lead with Great Britain in third and Switzerland very close behind. At half way GB and Switzerland were still battling it out for third place with GB 0.25 seconds ahead. Coming into the last 500m Switzerland managed to push through GB and held on to take the medal slot.

British Rowing performance director, Sir David Tanner, said: “We’ve seen some excellent performances from our GB crews over the course of this regatta. We come home with medals from four very classy crews, including two exceptional golds from the men’s four and women’s double. Despite their young age, all of our rowers have put in mature and confident performances over the course of the week and they can all be very proud of their achievements.”