Heavens, what a cracking regatta 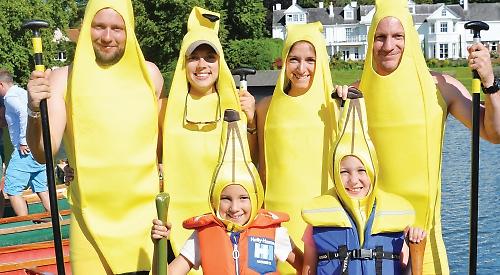 Thunderstorms failed to put off competitors at the annual Wargrave and Shiplake regatta.

More than 700 people took to the River Thames off Mill Lane, Shiplake, on Friday and Saturday last week (4 and 5) for the 150th anniversary regatta, taking part in 365 races in classes including sculling, punting and canoeing.

However, the event was hit by rain and storms on the second day, with racing suspended for half an hour at about 12.15pm when lightning was seen nearby.

The hold-up meant the regatta was running almost an hour behind schedule for the final races on Saturday, with many crews being sent away from the loading area when arriving for their races too early.

Despite the delays, organisers say the regatta was a success, with hundreds of spectators setting up picnic tables and gazebos to watch the racing from the bank when the sun returned later in the day.

The regatta took place on a stretch of the Thames between Shiplake railway bridge and land off Ferry Lane in Wargrave, while there were also 2km and 1km open-water swimming events on the same course early on Saturday.

Many visitors watched from their own boats on the river. Wargrave vicar John Cook was ferried across the water on a garden chair which was tied to the front of a boat on Friday, while on Saturday a large inflatable duck which was also seen during the Henley Royal Regatta and Henley Festival last month took in some of the action.

Hundreds of regatta regulars took part, while organisers say entries for the junior events were also up this year, with the regatta having held training days in skiffing, punting and canoeing over the summer.

One crew of youngsters, who were dressed in purple wigs for the heats of the junior dongola race, drew gasps from the crowd when one member was sent tumbling from their boat just metres from the finish line, needing to be fished out of the water by a safety boat.

A total of 30 finals were contested on Saturday afternoon.

Mr Karlsson also won the Vassal Adams trophy for most stylish punting. The award was named after a Henley man who enjoyed punting and was originally handed out at the Thames Traditional Boat Rally before switching to the regatta.

Mr Huston said: “It was a lot harder work this year, we weren’t as fast as last time. Having a great crew helps.

“It’s brilliant fun and it’s great that it’s in the 150th year. We didn’t get too wet during the storm because we all went over to shelter the marina.”

A crew called King Dongola, comprising Barnaby and Joanna Brown, Amanda Walden, Paul Nash, Drew McNaughton and Sunil Sha, returned to the regatta after almost 30 years away. The team previously won both the Junior dongola and Centenary dongola challenge in 1988.

Committee member Gill van Zwanenberg met Mr Brown in Paris last year and encouraged the crew to compete at the regatta again, where they finished second in the Thames dongola.

They also won the Hermon trophy, which is handed out by organisers to celebrate an individual or crew who has made a special contribution to that year’s regatta.

A crew called The Coffin Dodgers won the veteran dongola. The team comprised Suzette and Mick Smith, Kate and Adrian Robinson, Dave Bucknall and Chris Sayer and regularly competes in the regatta, previously winning the Thames dongola in 2009.

Mr Robinson said: “We have been doing it for 10 years but this is the first time we’ve been veterans, it’s a newfound stage.

“We had two races and the first one was in the afternoon so we got a bit wet but that’s just what happens.”

Christine Hillier won the lady’s single punting and also teamed up with Matthew Gordon to claim victory in the doubles.

David Gillard and Rory Copus picked up a double sculling skiff double, partnering Peter Lowe in the men’s race and teaming up with Peter Jacobs in the veteran men’s event.

Although the regatta was celebrating its official anniversary, it could be older as the only documented proof of its age is an 1867 programme printed by Higgs Group, publishers of the Henley Standard.

A old canoe was decorated with flowers and a floral display in the shape of the number 150 was on show during the event, while there was also a special new event to mark the milestone, the Jubilee dongola.

The race which was won by a team called POGO, comprising Pippa, Angus and Charlie Spencer and George, Donne and Will Paddison.

Crews in the race were also encouraged to dress up, with medals going to the best fancy dress. They included duck, bee and banana costumes but the winners were The Heebeejeebees who dressed as characters from cartoon The Flintstones.

The winner of the 2km swim was Matt McQuillan in a time of 25 minutes and 41 seconds, whilst committee member Adam Pennock came in second in 26 minutes and 22 seconds.

Sophie Whitworth was the first woman and third overall in a time of 28 minutes and 49 seconds, while Wargrave resident Hannah Young, who swam the Channel in 2014, came fifth in just over 30 minutes.

Peter Symons, the regatta’s honorary secretary, said: “The regatta’s 150th anniversary was, quite simply, better than ever. Great racing on both days, great crowds, lots of smiles all around, and even the weather decided to smile - most of the time!

“It wasn’t without its challenges: an unscheduled stoppage for lightning, a 365-strong race programme that challenged everyone’s powers of organisation and a special event, the Jubilee dongola, which added to an already crowded schedule.

“There’s always a first at every regatta and this year it was the stoppage needed early on Saturday afternoon after lightning was seen in the distance. Racing was suspended and all competitors were taken off the water for over 30 minutes to wait for conditions to pass.

“Inevitably the knocked on and turned the 30-minute stoppage in to the best part of an hour delay. We were always racing to catch up but it’s one of those things.

“It was a great regatta and everything we wanted the 150th to be. At the end of the day it’s two days of fun in a field for two villages by the river.”

1708118: Cosmo Hearnden and Lucy Bird in the Canadian canoe race

1708124: A child has to be rescued from the river after falling out of their boat metres from the finish line

1708125: POGO, who won the Jubilee dongola race, dressed in pink tutus for the event

1708127: The crews battle it out in the final of the Jubilee dongola

John Cook boat: Wargrave vicar John Cook was ferried across the river on Friday on a chair tied to the front of a boat

WSR fans: Katie Jackson and Liv Townend dressed up for the regatta