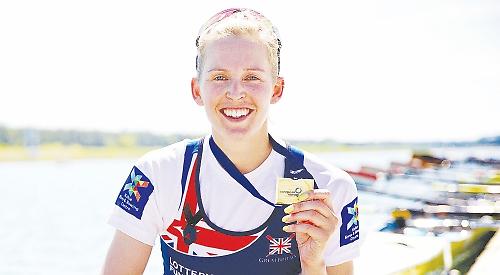 IT’S been more than a month since Vicky Thornley raced her Henley final, yet she still doesn’t know what caused her to lose the race to Germany’s Annekatrin Thiele, writes Robert Treharne Jones.

One of the most keenly anticipated finals had given Thornley the chance of becoming only the second British winner in the history of the Princess Royal Challenge Cup.

Thornley, the current European champion, was drawn against the German sculler, Annekatrin Thiele, a gold medallist in the quad scull at the Rio Olympics, who Thornley had beaten by some six seconds at Poznan two weeks earlier.

As Thiele sped off the blocks to establish the early lead Thornley, the taller athlete by some eight inches, began to use her long levers to gather pace at a lower rate.

But approaching the Barrier Thornley’s boat veered into the centre of the river as she compensated by pulling harder with her left hand to try and remain on course. Thornley said: “I still don’t really know – whatever did happen was out of my control. I lost my steering and the boat was being pulled into the centre so obviously that hampered my speed quite a lot.”

Thornley’s middle race has been her trump card this season, but on that fateful Sunday she had no chance to play to that strength.

“It felt like I lost speed due to whatever happened to my boat and that’s when I normally start coming through. I couldn’t do that because I was basically just rowing with my left blade.”

Whether weed on the fin was to blame was never established, but Thiele seized her opportunity, going on to win by an ‘easily’ verdict, to become the first Germany winner of the trophy since Katrin Rutschow in 1999.

A week later Thornley was able to reverse the result in the Lucerne final, and Britain’s leading sculler is looking forward with confidence to a podium finish in Florida next month.