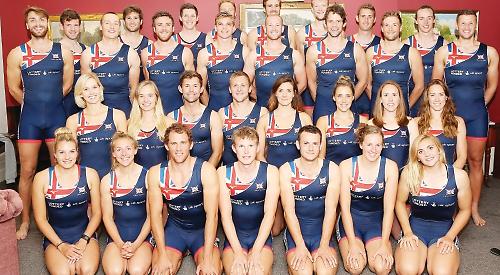 MORE than 30 Leander athletes have been selected for the GB senior team that will contest this year’s World Championships, to take place in Sarasota-Bradenton, Florida, at the end of next month.

As well as several established Olympians the team includes 11 Leander athletes who will don a senior GB vest for the first time, having been drafted into the GB team in the wake of several post-Rio retirements.

The men’s four, coached by rowing supremo Jurgen Grobler, remains unchanged from the crew which won gold at Lucerne last month. Olympic champions Will Satch and Moe Sbihi are joined by Oxford Brookes’ Mat Tarrant, a reserve in Rio, as well as Leander’s Matt Rossiter, a newcomer to the senior system.

The four men first came together for the World Cup in Poznan, where they won silver, before going on to win at both Henley and Lucerne.

Also unchanged is the all-Leander men’s quadruple scull, in which Jack Beaumont, Jonny Walton, John Collins and Peter Lambert won gold in Poznan before another triumph at Henley three weeks later in the Queen Mother Cup. Silver in Lucerne means they now move towards the World Championships full of confidence at their chance of another medal.

In the single sculls European champion and Olympic silver medallist Vicky Thornley is back in action after winning two World Cup silver medals alongside her gold from Racice earlier this season. Meanwhile her clubmate Tom Barras races the men’s single – the event which he contested at U23 level last year in Rotterdam.

Leander’s Karen Bennett has been brought back into the women’s eight, the event in which she won Olympic silver last year in Rio. Despite a strong early season showing in the women’s pair with Holly Norton, the selectors evidently feel they can help boost the eight to greater things following silver in Poznan and bronze in Lucerne. The men’s eight sees the return of Olympic champion Tom Ransley following an appendicectomy, while the crew is also strengthened by Olympic finalist Al Sinclair from the men’s pair.

Leander is represented in both lightweight double sculls, with London 2012 champion Kat Copeland teaming up once again with Emily Craig of University of London in the women’s event, and Sam Mottram racing with Oxford Brookes’ Jamie Copus in the men’s double.

The relegation of the lightweight men’s four out of the Olympic programme for 2020 mean’s that GB will enter a lightweight quad in Florida. Ed Fisher is the sole Leander representative in the crew, alongside multiple world and Olympic medallist Pete Chambers of Oxford Brookes, Gavin Horsburgh of Edinburgh University and Zak Lee-Green of Agecroft.

The selection battle for the women’s quad scull is still ongoing, with Jess Leyden’s recovery hopefully continuing in time. Leander’s Beth Bryan and Holly Nixon have already been named for the crew, together with Reading’s Mathilda Hodgkins-Byrne, who partnered Leyden to the U23 doubles title last year in Rotterdam.

The men’s pairs are an all-Leander affair in Sarasota, where Tom George and Tom Jeffery get their first race together in the coxless division, while Tim Clarke and Tom Ford will rely on the services of Oxford Brookes’ Harry Brightmore to steer them to success in the coxed event.

The Paralympic boat classes sees Leander’s Rio gold medallist James Fox anchor the new-look mixed coxed four, the event in which GB has been dominant since the introduction of rowing to the Paralympic programme in 2008.

“Once again it is pleasing to see so many Leander athletes among the GB team at the world championships, including those for whom this is their first senior vest” said Leander chief coach Mark Banks.

“Their selection is testament to the hard work undertaken by our coaches, and all those who help Leander continue in its work as the main feeder club for the GB international team.”