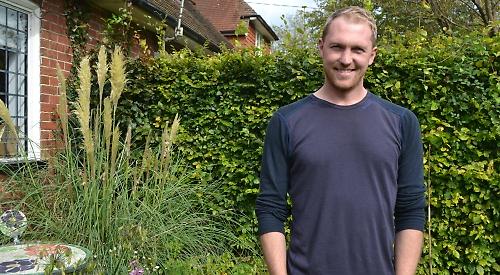 BACK home, a month after pulling out of a world-record attempt to row across the Arctic Ocean, and people are still asking him the same question — how are the hands?

That’s because the two-time Olympic champion had posted a picture of them online. They were wrinkled and blistered after 11 days at sea inside wet gloves.

Gregory, 33, who lives in Ipsden, was part of a six-man crew attempting to row from Svalbard in Norway to Iceland, hoping to set 12 world records along the way.

But the crew were forced to stop on the tiny volcanic island Jan Mayen, about 370 miles short of their final destination, due to continuously treacherous conditions.

They were stranded there for two weeks before being rescued by the Norwegian coastguard and he was reunited with his partner Emily Airey and their children Jasper, seven, Daisy, four, and Jesse, one.

Gregory managed to get home in time for his daughter’s first day at Peppard Primary School and he was the talk of the playground among the parents.

“Everyone is glad I managed to get back safely,” he said. “It’s nice to hear but it didn’t seem like a big deal to me. The hands are the thing everyone seems to have seen a picture of and asks how they are now, grabs them and has their own look.

“When I shared it I knew people used to like looking at blistered rowing hands and then it went a bit crazy. Now I look at it and think that’s actually pretty disgusting and unusual but it’s all good fun. They’ve dried out now and they go back to normal.”

But his feet were actually a lot worse as he, like most of his crewmates, was diagnosed with non-freezing cold injuries when seen by a doctor on Jan Mayen.

Gregory still has no feeling in his toes due to his feet being wet at temperatures just above freezing for days on end.

While at sea Gregory ran out of socks and was forced to use neckwarmers, underlayers and bin bags in an attempt to keep them dry inside his sodden boots.

“I was really worried about my feet,” Gregory said. “I could not feel them at all and I would sit in the cabin rubbing them for 90 minutes and doing whatever I could to try and get some feeling back.”

Despite the after-effects, Gregory says he has no regrets about signing up to the challenge.

He liked the idea of being back as part of a team, which he missed since retiring from rowing after the Olympics in Rio last year. He also wanted to return to Svalbard, which he had visited as a 17-year-old with the British Exploring Society, a charity that gives young people a chance to go on expeditions.

On August 8, Gregory and his six-man crew departed at 2am, rowing north for two-and-a-half days to break one of the world records, to be the furthest north any rowing crew has ever been.

For most of the journey the water was flat, which helped them to move quickly and after reaching the ice cap, and stopping to take photographs, they turned the boat around and began going south.

The sea remained calm for the next day and a half but then the size of the waves began to increase. “They were four or five metres high,” he recalled.

“We had gone to that from mirror flat water. The waves would come and the swell would follow and hit the boat from different directions. It wasn’t predictable and we were getting banged around.”

The treacherous conditions carried on for days, with the rowers occasionally getting dislodged from their seat which they had strapped themselves into.

“None of us were ever washed overboard but I started to worry about it,” Gregory said. “You have a life jacket and you’re connected to the boat, but you still worry about going overboard and getting capsized.

“If it happened there would be three of us under water, we’re attached to the boat so we could climb back in. But if you spent five minutes in that water your chances are pretty slim.”

As well as the dangerous sea conditions, the crew were hampered due to endless grey skies and a lack of sunlight. There was no sun for days meaning there was limited electrical power as this was mainly generated by solar panels.

Three days away from Jan Mayen, and still hoping to make it to Iceland, the crew decided to turn off the boat’s electricity completely and navigate to the volcanic island using a compass and steersman on the rudder, only turning the back-up power on intermittently to check they were going in the right direction.

“It was never-ending and we never seemed to get any closer,” Gregory recalled. “I never got over the perception of distance and time when we were rowing.

“I wanted to be in an obscure place and be isolated but there were times when it was scary, especially considering the safety aspects, and the chance of things going wrong.”

Three days later, and rowing in constant daylight, the crew estimated that they were about two miles from the island but they struggled to see it due to large waves and low-lying cloud.

But Gregory recalls how the water suddenly became flatter and then being able to see Beerenberg volcano, which towers over the island. “It was an amazing relief and quite an exciting feeling,” he said.

They were welcomed by a team from the Norwegian military who took them to showers, fed them and provided somewhere to sleep. A doctor then checked them all over to make sure they were okay.

“I had lost 8kg and one of the other guys lost 13kg,” Gregory said. “I got a shock when I saw my body for the first time and saw how drawn in my stomach was.

“They helped us get warm, gave us clean clothes and chucked everything we had into a massive washing machine. There are only 18 people on the island and they were so welcoming. I knew we were in a special place, the landscape was gobsmacking.”

The crew had hoped to continue their journey after resting and completing some repairs to their boat.

But after a few days on the island Gregory and three crew mates made a decision not to continue.

“By that point we started to realise how bad our feet were and we were actually being injured,” he said. “I didn’t want to take any more risks. There were safety risks and I did not want to carry on.

“The top military guy on the island agreed it was not a good idea to carry on. For me and the other guys that was a relief.

“It was an exceptional experience, dangerous, exciting and nerve-wracking but really positive and amazing fun.”

Two weeks after arriving on Jan Mayen, the crew were picked up and travelled for two days back to northern Norway before they went their separate ways.

Gregory was reunited with his family at Heathrow airport where they were waiting for him.

“They all came to pick me up,” he said. “Seeing them put it all into perspective. I realised my kids didn’t care what I had done, they just wanted me at home.

“I want to be home and do fun things with them to make their lives interesting and exciting and give them opportunities. There’s no point giving them a story to tell if they don’t get to experience it for themselves.”

But looking back he is proud of what he achieved. Throughout the trip he saw a variety of bird life, whales and seals.

It was a particular highlight for Gregory, who loves exploring the woodland round his home with his children and harbours ambitions to be a wildlife presenter.

“Every now and then a whale would pop up,” he said. “Sometimes you would see them shooting from their blowhole. They weren’t really bothered by us.

“They could be feeding and you would row past them slowly, slowly and then watch them as we rowed away.”

Gregory is now planning write a book about exploring the outdoors with young children, based on some of his own experiences.

This is on top of continuing to do motivational speaking, which helps him pay the household bills.

Gregory said: “I’m persevering with speaking about my Olympic journey and eventual success and now I can talk about this as there are definitely some life lessons as well as being a quite an interesting story.”

And he could always show them that picture of his hands.