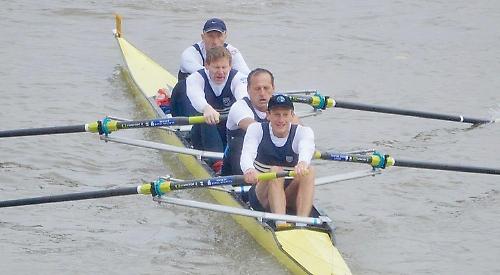 UPPER THAMES athletes continued a strong run of results this year for masters rowing as they won five events at the Veterans Head of the River Race on Saturday.

The event is the premier long distance race in the country for masters rowers in fours and quads, raced in reverse over the four-and-a-quarter mile Boat Race course in London

Both the club’s women’s and men’s squads were successful, with age category wins from 43 up to 70 years old.

Olympian Miriam Luke steered her women’s quad to victory in their age group. Speaking after the win Luke said: “It doesn’t get any easier out there, but it’s so great to row with these ladies and win in such a strong event.”

Paul Stewart-Bennett, another of the club’s many former GB international athletes, steered his coxless four to victory. After the win he said: “We’ve been training in this crew all year and it was a great feeling to beat the strong crew from Quintin by nine seconds. I’m very proud of the boys.”