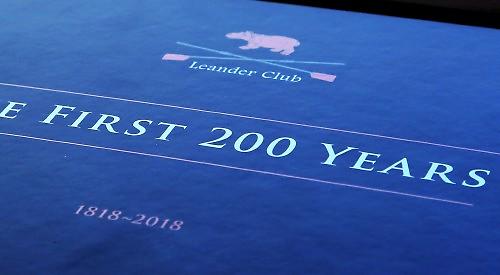 LEANDER Club kicked off its bicentenary year with the launch of a commemorative book, writes Robert Treharne Jones.

The First 200 Years was unveiled in front of more than 100 members and guests at 11 Downing Street, the official residence of the Chancellor Philip Hammond.

The 300-page book took more than a year to put together under the editorship of Andy Trotman, himself a Leander member for more than 30 years.

Mr Randall paid tribute to the leadership and commitment shown by Mr Trotman, whose former experience as a publisher stood him in good stead as he brought the project to fruition.

The illustrated volume looks back over the 200-year history of the club, including its early beginnings in Lambeth, the club’s move upstream to Putney and ultimately to Henley. It includes the trials and tribulations that culminated in the 1984 “revolution”, which paved the way for Leander’s recent run of success.

Former club president Sir George Cox, a former chairman of the GB selectors, wrote the chapter chronicling the club’s Olympic athletes. Other chapters describe a day in the life of the club, the rigorous training schedule of the current athletes and the outreach programme which brings newcomers into the sport at junior level.

The book was financed by Leander members’ subscriptions and some copies are also being made available to the public.