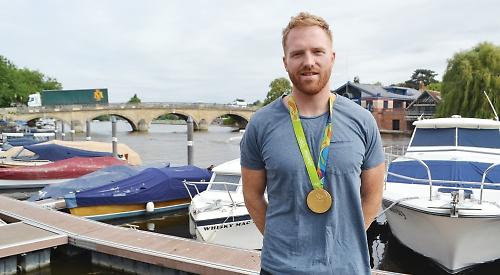 OLYMPIC champion Will Satch has had heart surgery to fix a condition which threatened his rowing career.

He had an operation to stop him suffering episodes of atrial fibrillation, which causes an irregular and abnormally fast heart rate that can last days.

Satch, 28, originally from Henley, had the three-hour operation at St George’s Hospital in Tooting.

It comes after he suffered two attacks during competitions last year. Once was during a race at the world cup in Poznan in June and the other was during the warm-up for a semi-final at the world championships in Florida in September.

Cardiologist Dr Mark Gallagher carried out a procedure known as an ablation by heating the problem part of Satch’s heart to destroy a bit of it and create new scar tissue which breaks the abnormal electrical circuits in the heart and removes the troublesome heart muscle. This should stop the attacks.

Satch, who stroked the Team GB eight to gold at the Rio Olympics in 2016, told the Henley Standard: “I decided that if I wanted to keep rowing I could not go on with the way it was. Last year I was performing as good, if not better, than I had through the previous Oympiad but when it goes I am half the man.

“It’s frustrating to train hard through the year and then not be able to perform. Last season was the first time I had not won a gold medal at the world championships for four years. I was not happy with that and this condition certainly did not help.”

He had been able to manage it but last year he begun having more frequent episodes.

“It gets a lot worse through intense, endurance exercise,” said Satch. “Being under such a stringent programme from quite a young age has made it come forward a bit earlier.

“It feels horrible. It’s like having a four-piston car and you pull out one of the pistons and it runs like hell.

“As soon as it goes back in then I feel absolutely fine and normal. When it happens during exercise it feels pretty horrific.

“It has been trying to go at 200 beats a minute and then stopping and starting. I think I feel it more beacuse I’m an athlete — my body is supposed to be a temple and feel amazing.”

Satch, who attended Shiplake College, first became concerned after having an attack in the run-up to Rio.

He was with the Great Britain squad at an altitude training camp in Silvretta, Austria.

He recalled: “I was in atrial fibulation for two days and thought I was going to go to Rio.”

He recovered and went on to win the gold, adding to the bronze medal he won in the men’s pair with George Nash at London 2012 and three gold medals at world championships.

After the attack at the world championships last year, Satch was forced to pull out of the semi-final of the men’s four and was replaced by Ollie Wynne-Griffith for the race.

He was able to rejoin crewmates Moe Sbihi, Matthew Tarrent and Matt Rossiter for the final where they won bronze.

Satch said: “It had happened during a race in Poznan, which was not a nice experience, and then in the warm-up for the semi-finals at the world championships.

“You can be as fit and strong as you like and be at the top of the team but you get to the end of the season and you’re only able to compete at 73 per cent.”

During the off-season he considered having surgery. He consulted with his girlfriend Zara Milne, a doctor in Bristol, who talked him through the operation before deciding to go ahead with it.

Satch said: “I’m lucky enough to be going out with a doctor and she calmed me down about the whole thing.

“She had a much better idea of what was going on than me.” He had been on a training camp in South Africa when he flew back to the UK to have the operation.

He said: “I’ve gone from doing three to four sessions a day to doing nothing whatsoever.”

The procedure has an 80 per cent success rate.

Satch said: “The doctor told me after the surgery there was an active area, which is a good sign with this operation.

“That is what he was focused on and said the likelihood of success is quite high.”

Dr Gallagher is now working with Lady Ann Redgrave, British Rowing’s chief medical officer, and Satch to work out how to get him back to his best.

Satch said: “It’s going to be a slow process. The procedure has not been done on a lot of people my age.

“Before I went in I was fit as a fiddle. I hope the surgery will eliminate the problem.

“British Rowing have overseen the operation and have been really understanding about it.”

Satch and Miss Milne went to Padstow in Cornwall for a long weekend to help him rest.

“We had quite a slow weekend,” he said. “I felt like an old age pensioner but it was nice to switch off.

“We don’t get an opportunity to do that when we are training all the time. It was really nice but the weather was grim.”

Satch said he was excited about getting back to the Caversham training lake and spend time with his crewmates.

He added: “I really miss the training. I’m not good in my own company and have been finding it quite hard.

“The guys came up to see me on Tuesday and cooked me dinner. I’m looking forward to going back and seeing the boys.”